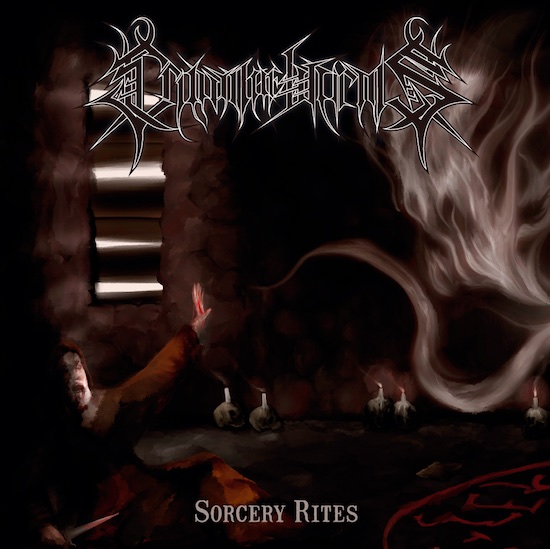 I have not been in South America so far and I fear I will probably never set my feet on the ground of this fascinating continent. However, I like this part of the Earth and therefore I am really glad about the fact that South America comes to me from time to time when I don't come to him. This time a delegation from Peru's capital knocks on my door. Hola ¿que tal? Come in, dudes, let me experience your noise.

Crown Of Worms take a wild ride in the no man’s land between black and thrash metal. I admit that they do not deliver the most violent music. South America is famous for its extreme bands with a bestial approach, but Crown Of Worms stay within the more or less usual range of black thrash harshness. This is not to say that Sorcery Rites suffers from lameness, nowhere near. Okay, their lyrical concept about endless war, unholy revenge and yada yada yada is not absolutely brand new, if I am not mistaken. Yet this is nothing that pounds the album into the ground, because the artists master the most important discipline – the music. The pretty complex songs reveal a rather unusual black thrash approach and songs like 'Angelrust' offer some truly strong parts. Among other things, the aforementioned piece scores with two blast beats motivated sequences that drags the whole piece into a vortex of perdition. Maybe this is not the most accessible album, but a few outstanding parts provide the listener orientation. Especially the straight, speedy rhythms open the gate to the sound cosmos of the band. 'Under Blackened Wings' holds some of them and from time to time this is what I want to hear when it comes to black thrash: a simple yet thrilling outburst of primitive aggression. By the way, that’s much better than the strange, almost toothache causing guitar sounds at the end of this song.

I do not know if the lead vocalist is familiar with Rose Tattoo, but at least he has inhaled the motto that “Nice Boys Don’t Play Rock ‘n’ Roll”. Or black thrash. Thus, he celebrates a pretty ugly performance and adds a proper degree of despair, pain and belligerence to the instrumental section. His rattle opens the closer which takes a straight road to the fiery pits of hell (greetings to Slayer, album 2, track 5, at this point). This song marks a pretty triumphant end for this adequately produced album and makes me think of Desaster with Sataniac (not Okkulto) at the microphone. But regardless of the exact source of inspiration, one thing is sure. Crown Of Worms, originally founded in 2002, prefer the early, honest eruptions of their subgenre and do not take care for modern frippery. And so we get a full-length that does not redefine anything and perhaps it will not get a slot in many best-of-22 rankings at the beginning of 2023. But it is a solid, recommendable work for its target group and I am curious what comes next from South America.