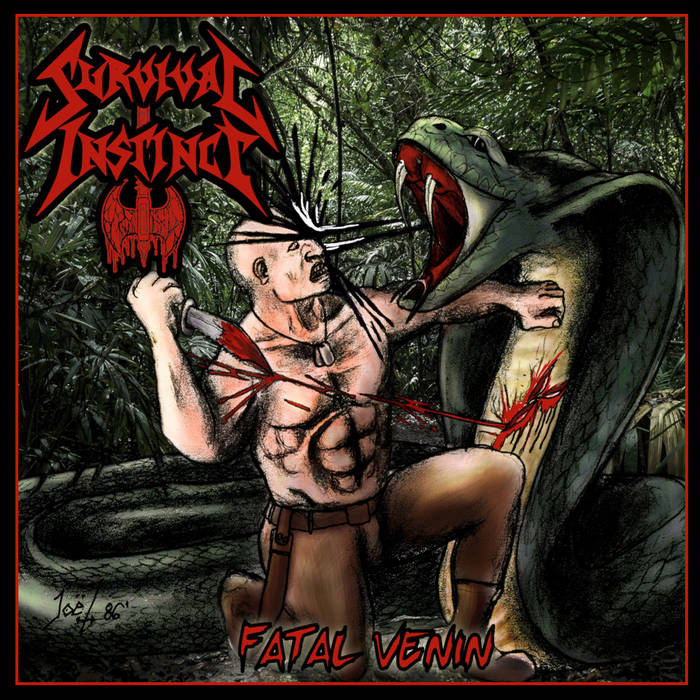 The Archives make it easy to avoid errors. At first I thought that I am listening to a debut EP. Both the terrible artwork and the partly uncontrolled or even chaotic musical approach made me think this. But the discography of Survival Instinct revealed immediately that this release is not the result of greenhorns. Honestly, I wish it were different.

Fatal Venin knows no remorse. It is a brutal kick in the face, full of aggression, screaming guitars and unbridled hammering drums. Generally speaking, I like the wildest forms of thrash, but this does not mean that I enjoy every release from this side. The five tracks of Survival Instinct are no bullshit, definitely not, but they lack individuality, razor-sharp riffs and an emotional touch. Of course, I do not speak about soft or dreamy sequences. What I want to say is that this EP does not trigger any emotions, at least in my case. Catchy elements are missing and so there is not much that keeps sticking in my brain, although I gave these 16 minutes a lot of chances. But the only thing that I can remember is that 'Slow Death' has borrowed the snappy riffing from Slayer’s “Raining Blood”. It sets in after the first minute of the track which starts promising and ends interchangeable.

There is little to say about the rowdy production. It doesn't harm the material, but it doesn't make it better either. The problem of Fatal Venin is not its technical execution, but, as much as I regret it, the music itself. Maybe the band strived for an “Epidemic Of Violence” part II. However, let’s face the truth. It needs better songwriting skills to get close to this classic. And, by the way, song titles like 'Poser Killer' are ridiculous as well. This is 2022, not 1985. No doubt, Survival Instinct can score with passion and power, but it takes more to enrich the flooded metal market of our times. Even if the EP were a debut, it would lack the charm of “Sentence Of Death” or “In The Sign Of Evil”. I am sorry.