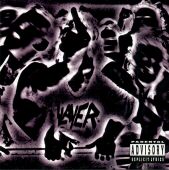 I think we all agree that Undisputed Attitude is Slayer's most exceptional album. Its concept is questionable. Even almost 20 years after the release, I am still slightly confused about the offering of 'Gemini', that does not fit into the scheme. It seems as if Slayer did not trust their own concept. Or - worse still - they wanted to create an additional purchase incentive at the expense of their integrity. "Yes, we want to cover raw and violent punk classics. But come on, let us at least take one new Slayer track so that everybody has to buy the album, if he wants to have a complete Slayer collection" - this was seemingly their train of thought. To add insult to injury, the slow-moving 'Gemini' stands in sharp contrast to the other songs and it does not reach the expected level of aggression and velocity. The solid but fairly weary composition fails to enrich the catalogue of Slayer sustainably.

Apart from this minor conventional flaw, the band cannot be blamed for half-heartedness. Slayer have internalized the spirit of the songs and they express it in a furious manner. An acoustic amok run reminds us that the fucked up universe also knows good extreme music which cannot be labelled as metal. I freely admit that the pretty harmless Ramones are the only punk band that I really love. By the way, their best track is 'Garden Of Serenity' from "Halfway To Sanity". But that is another story. I just want to say that I am no expert for punk music and I do not know the original tunes. This said, the here presented attacks have absolutely nothing in common with the musical approach of the forefathers of punk. The songs barrel along as if there is no tomorrow. Even if the band slows down the pace, the aura of stubborn resistance stays the same. Song titles such as 'Guilty Of Being White', 'Violent Pacification' or 'Richard Hung Himself' show impressively that Slayer know how to play the game of provocation. And I do not think that we have to discuss about these lyrics. From my point of view, they should not and cannot be taken seriously.

The adrenaline rush seems to be unstoppable. After having performed the first high velocity eruptions, the band does not get out of breath and the level of harshness remains unaffected. For example, 'Spiritual Law' is one of the most intense orgies of the album, although it has a mid-paced middle part. Furthermore, it is remarkable that this song, as well as the majority of the other tunes, considers the necessary amount of melody lines. The crude authors of the original versions knew their business. Compared with their working results, the two punk-influenced creations of Jeff Hanneman (R.I.P.) do not leave a lasting impression. To play punk songs means more than killing your instrument within 90 seconds.

Despite the forceful and mainly clean sound, the album transmits the crusty character of typical hardcore / punk eruptions. Tom Araya's vocal performance is an important component in this context. He sounds less demonic than on the regular albums. Instead, he seems to scream permanently "piss off", while using mysteriously other words for that friendly invitation. Anyway! Undisputed Attitude has its own charm. Enjoy slayerized punk anthems and don't give a damn about the political - or naive? - lyrics. This is punk! (As a marginal note: the second CD offers three live tracks, among other things a cover version of Venom. Nice, but unspectacular.)

I haven’t heard Slayer this pissed since "Reign in Blood"! I mean the force and ferocity of this album is unmatched. Slayer don’t cover these songs, they butcher them, doubling the tempos (often turning the normal pace into blast beats) and dropping the tuning to a death metal standard. The result is absolute chaos and a headbanger’s heaven.

It’s hard to get into at first, sometimes the riffs are sped up beyond recognition and so they end up sounding too distorted and fast to appreciate. It’s easy to lose interest in all the hurry. Araya’s screams are constant and he signs the funny punk lyrics with absolute anger, but the words are often indiscernible since he’s forced to sing them so fast, in fact, it’s fastest I’ve ever heard anyone sing!

"Can’t Stand You" and "Ddamm" (Drunk Drivers Against Mad Mothers) are two songs penned by Jeff Hanneman during the early years of Slayer, when he had plans for a punk side project. "Abolish Government..." is definitely my favorite, with the strong beat and the catchy riffs, the first song has some very nice riffs too, and the foul lyrics of "I’m Gonna Be Your God" will appall many a parent. And who can forget the absurd lyrics of "Richard Hung Himself".

Most of the songs are under 2 but "Gemini", being the one exception, is a traditional Slayer song and kind of an introductory to the next album. The slow and mesmerizing finish comes as a blessing, to some, from the absolute chaos and fury of the album. The album’s one flaw is that either the songs Slayer picked are mediocre, or they had altered them too far beyond their original quality, so many of them ended up kind of poor. It’s good stuff but nothing that impressed me too much.