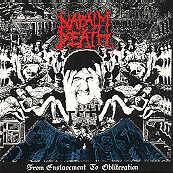 If this isn't the best grindcore album ever, I don't know what the hell is. I've been in love with Napalm Death's almighty second effort From Enslavement To Obliteration since the minute I first heard it. I like most Napalm Death albums, but this one is definitely my favorite. Scum will never ever amount to this. Enslavement is far too superior.

The main reason why this is such a fantastic release is because of it's sound and structure, it's flawless. The drums sound amazing, the snare is thick and has such a great sound to it. Same thing goes for the kick drum. I really appreciate the drums' sound on this, whoever is responsible for making them sound the way they do, thank you so much because it's so PERFECT. The drumming itself is furious, fast, and rambunctious as hell. On some parts he slows down, or plays a mid paced-fast pocket beat, or blast beats the fuck out of your eardrums. Mick Harris' drumming is absolutely relentless, and I appreciate that he throws in more stuff in his playing, than just blast beats over and over, to give a little bit of variety to this grindcore album. Most noticeably in the opening track, there's no furious grindcore drumming just yet, he slows down for a little and feels the groove before releasing the beast on 'It's A M.A.N.S. World'.

Honestly, I probably wouldn't care for this at all if the drums sounded any different. That factor alone is what makes this album so magnificent. But obviously that can't be the ONLY reason why I love it. The guitars are similar to the drums, also having such a thick and rich sound that sounds fantastic. The drums and guitar work in perfect harmony together, such a fantastic mixture. The riffs themselves are also quite a treat. This may be a grindcore album, but the riffs are most definitely differentiable, and you can tell which song is which. Songs like 'It's A M.A.N.S. World' and the title track are some prime examples, you know which riff/song is which. Grindcore is a genre where most of the songs are under a minute and most of them sound indistinguishable, and the great thing about From Enslavement To Obliteration is that they ingrain every separate track into your brain no matter the length, so this serves as a more memorable "grindcore" album overall. You know the songs one from another, rather than knowing just the album overall, if that makes any sense.

Lee Dorian's vocal work is quite the thing as well. He can do some ridiculous and nasty screams, growls, shouting, you name it. This man truly is a beast behind the microphone, he can spit out some good shit. Even though he was only present on two of the band's full lengths, he still did a great job and is still loved by fans. Scum is still popular among listeners these days, as well as Enslavement, but more Scum, as it's more monumental. Shane's bass is incredible. It's your trademark static and very fuzzy sounding bass, but the man knows how to put it in it's place. Enslavement is an album filled to the brim with bass and a thick sound, and Shane's bass does nothing but make it sound even better. Parts where fast playing suddenly stops and the bass shines alone for a few seconds, or when a song starts off with the fuzzy bass for a few seconds, they're so great, it's a big time giant eargasm and couldn't be any better. I'm also a pretty big fan of the cover art, I think the colors they used are awesome. I like the nice shade of indigo along with the orange logo, with gray+black+white surrounding images that have some sort of deep meaning. Whoever pieced this together did it greatly, it's some eye candy; and it also fits very well with the music.

In my eyes, this album is very flawless and nothing short of perfect. This is the ideal Napalm Death release. A good amount of people prefer the more raw and frazzled sound of Scum, but I much more prefer the matured, improved, thick, and more thought-out sound of From Enslavement To Obliteration. Like I said before, the drums are the BEST THING about this album, enough said. If the drums sounded any different, this wouldn't be as magnificent as it is. It's the key thing that makes Enslavement perfect!!! Fantastic drums overall, awesome guitar sound, amazing bass, good songs that aren't too random and thrown all over the place, vocals with some variety, some pretty damn good cover art, I don't understand what isn't to love about From Enslavement To Obliteration. I enjoy the whole thing whenever I listen to it, it always makes me happy whenever I put it on. It's PERFECT and always will be forever. This is for sure the best thing ND has ever done. Undoubtedly one of my all time favorite albums.

Rating: Absolutely magnificent, a well deserved 10 out of 10.