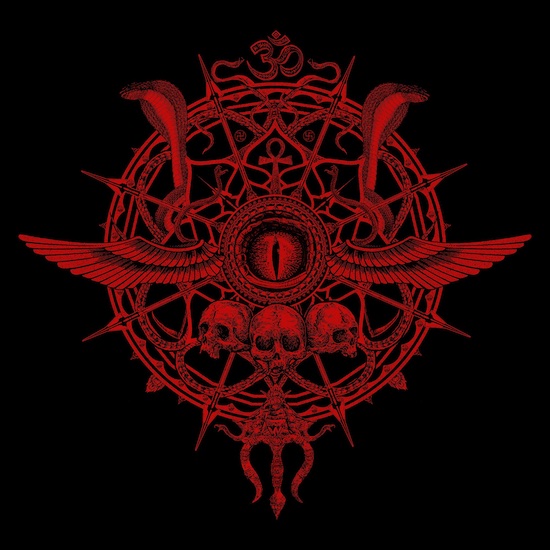 If there's one subgenre within metal which has the most, "infamous" reputation that would definitely be "war metal". Within the surprisingly nebulous tag of "black/death" metal or blackened death metal, we have the style pioneered by the mighty Blasphemy and popularized by Revenge, and in recent years, people are paying attention to the war metal scene of India. Which brings me to today's subject, the band Aparthiva Raktadhara and their debut album Adyapeeth Maranasamhita (আদ্যাপীঠ মরণসংহিতা), to be released through Iron Bonehead.

Aparthiva Raktadhara, who for the sake of brevity I'll refer as AR, are indeed a war metal band, though they describe themselves as "Kalikshetra Death Metal", who came from the Kolkata scene which has pretty much become a hotbed of war metal in recent years. They caught a lot of people's attention with their debut release Agyat Ishvar (অজ্ঞাত ঈশ্বর), which displayed a raw and aggressive style of war metal that also leaned heavily into death metal-ish riffs and an oppressive atmosphere. Four years later and with their debut the band have successfully sharpened and tempered their style into a deadly blade.

The main thing people that were already familiar with AR, and even newcomers is the production. The band had a massive improvement in sound quality and audibility. That's something to be expected, since their previous and only other release was basically a demo that sounded accordingly, but that doesn’t mean the band lost any grit or edge. Adyapeeth Maranasamhita (আদ্যাপীঠ মরণসংহিতা) is still a relentless and punishing record that holds no bars, takes no prisoners and the production while much more audible than their debut still has that oppressive and murkiness that enanches the music's chaotic brutality. The speed, intensity and aggression the band displayed in their debut are still present (if not stronger than before) and furthermore the band's playing and technical prowess has also improved significantly. Their death metal influence is solidified and while this might be a cliche heap of praise, the best part of this records are the riffs courtesy of band member Takshaka, who also handles the bass. The guitar riffs steal the show, they keep the raw brutality that every good war metal record should have, and which was a highlight of the earlier EP, but with much more finesse and skill, which makes the riffs more complex and technical, and as such, the music sounds more intense and overwhelming, without devolving into distorted noise.

The drumming is also excellent, and like the guitars, it's a blend of raw aggression with technical prowess. V. Hydra truly displays the full extent of his drumming and it complements the music accordingly. The bass is the only instrument that doesn't shine as bright, but then again, it doesn't really need to, Takshaka still managed for the bass to match his excellent guitarwork, so while the seeming absence of bass is a personal gripe, I can't fault the band for it. Which now brings me to the vocals of Nahas, which are mostly the same as their demo, but then again, that's all the band needed. Nahas has a very distinct raspy growl which suits the band's music, but it also completes the band's overall sound. While war metal vocalists usually switch between a high pitch screeches or very low pitch growls, Nahas is in an ideal inbetween where his vocals sound demonic enough to be recognizable, but are also in line with the overall performance of each song, and that's one of the strongest aspects of this record, and of AR as a whole. The band are a unified and well oiled machine, as each member is an integral component of the music, the only real gripe is the near inaudible bass, but as I stated, the rest of the band's performances compensate for it.

Overall Aparthiva Raktadhara did everything a band should do with their first full legnth album, display all their talents, improve upon the shortcomings of their earlier releases and expand upon their better qualities. My only disclaimer is of course approach this record's music for what it is, a grim and oppressive style of metal that's only meant for those already in the know. The band may have polished their sound from their demo, but they're still an entity of sonic devastation.