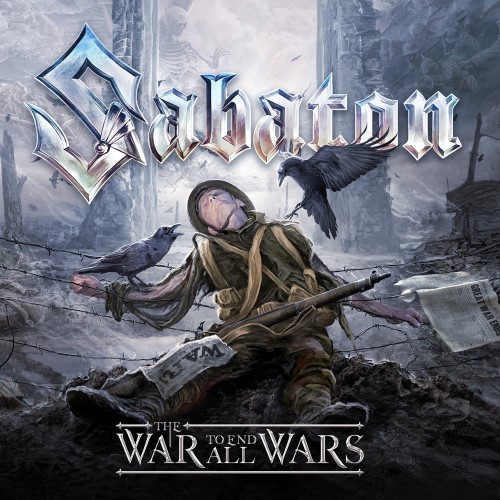 If you can describe an album using only a famous internet meme, then Sabaton's War To End All Wars would hands down be GTA's "Oh shit, here we go again". Swedish powerhouse returns with a rehash of all their previous albums, wrapped in a sterile production that will please the majority of their fan base. That doesn't say a lot now does it?

Sabaton has become so standard that they could well be writing songs just by using the cut/paste feature in Cubase as long as the tempos match. Everything that the band is known for is here again, be it the sloppy vocal delivery, the over-the-top keyboards and orchestrations, the shredding and the anthemic war marches. The song structures and vocal lines are either getting worse on every album or I'm past the point of being mildly amused by the same ideas over and over. They are also running around in circles when it comes to their lyrics, there are only so many ways to describe heroes fighting a valiant war and dying, counting bullets, or operating a historical submarine and they have done it all, multiple times. We're talking about a Sabaton lyric generator typewriter thing here, it's that bad.

I always thought that when Sabaton eventually would get really big, they would have the artistic freedom to really kick ass and try some out of the box song writing, you know as they are pretty damn good musicians too begin with, but they seem too far gone on this plastic fantastic approach to everything. Drumkit with zero punch and daring, guitars with no soul that could well be glorified keyboards leave us with a tasteless, soulless inoffensive amalgam of all their previous albums. Every worthwhile idea is not even theirs anymore. There is a blatant rip-off ("homage" I'd suspect) on 'Dreadnought' which is a copyright offense against one of the greatest songs ever written ('In Dark Places' by the legendary US metal Gods Crimson Glory) that shadows over the rest of the offerings here.

At the peak of their fame, Sabaton released their most bland an uninspired album (queue Homer Simpson and "their most bland an uninspired album YET") which fails to generate any sort of feeling, apart from indifference and disbelief. Sure, they will sell a million copies, continue to fill those arenas and bring a fresh batch of 15-16 year old fans to what power metal has become today, but sadly this is the only slightly redeeming quality left about this band. Pity.