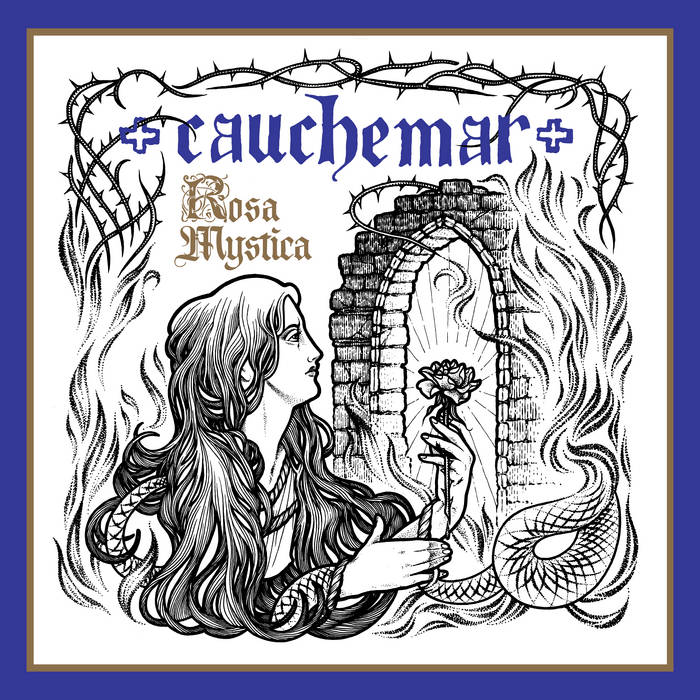 I've waited so long for the followup to 2016's Chapelle Ardente and finally here it is, the latest doom metal opus from Canada's Cauchemar. How did I find this band? I think I was looking up "modern doom metal" or something concerning Pagan Altar in 2017. And man, when the voice of Annick hit me on 'Nècromancie' I was sold and it's been that way ever since. Had to go back and check out Tenebrario and was impressed also with that work of art. Now It's been nearly 6 years since the release of Chapelle Ardente and I've been keeping an eye out to the point of them staring with disbelief once I saw Rosa Mystica pop up in the promo box. And what do I think after nearly 30 full listens, absolutely fantastic.

There was a considerable amount of pressure placed on the back of Rosa Mystica, provided Chapelle Ardente was such a great album; Cauchemar needed to deliver on the atmosphere, the licks, the vocals and overall memorability. And they did so seamlessly in so offering a spellbinding collection of heavy doom metal tunes that borrow from the likes of Thin Lizzy, Angel Witch and even Scorpions on songs such as the rocking 'Notre-Dame-sous-terre' and the glorious 'Danger De Nuit' that sounds like it could have been written for or ripped right off of Taken By Force. These two songs have serious instrumental impact, with the former placing you in the front row of a Thin Lizzy concert and the latter causing you to hear the voice of Klaus Meine in the back of your mind all the while being mixed with some black metal stringing. Other traits of Cauchemar could be heard throughout the album such as the chiming of the ritual bell on 'Volcan' (killer middle easter sounding solo by the way), and the organs that Annick handles so adeptly and of course the French tongue with which all songs are sung. These merged with the nightmarish atmosphere Cauchemar is able to conjure so easily, making for an unforgettable journey.

Moving onto tracks such as the acoustic dominated 'Rosa Mystica' and what seems to be a Motorhead inspired 'Le Tombeau De L'aube' merged with haunting winds, synth and all, you get the feeling that while being a full fledge Cauchemar undertaking, the band also used this as an opportunity to pay homage to the heavy metal fathers before them. All is well here but the main question for most I think would be is this better than Tenebrario or the daring Chapelle Ardente. For me at least I'd say Rosa Mystica is an album with its own face that stands on its own two and wants to be its own thing so it's really tedious to compare it to either of the two mentioned albums. But for what it offers I'd say that Cauchemar gave their best effort here in crafting something that can withstand the test to doom. Set to be released as a CD and on Vinyl through Temple Of Mystery 05/16/2022, get this if the spirit of metal/rock and doom still reside in you.