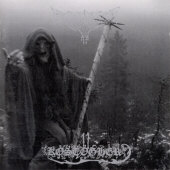 Kostogher marked the return of the Shaman with the strange weapon who had made his first step with the pretty strong Fran Marder in 1995. The album with a playtime of more than 57 minutes did not reveal significant changes in style. Shamaatae left no doubt that he had already found his preferred approach on the debut and so Kostogher appears as the logical follow-up. Moreover, it scores with many positive details, not only its slightly harsher approach.

The drums are just a dull thumb, otherwise the production is powerful, direct and despite its clear aggressiveness also atmospheric. Therefore, 'Gamall Uvermark', a non-metallic intermezzo with plaintive female vocals, would not have been necessary. Positioned in the middle of the compositions, this piece robs the record of a few percent of its coherent flow and musically it is also a flop. (Incidentally, the track before the closer is also out of style, a relatively lame instrumental.) But I actually wanted to talk about the positive facets of this sophomore album. The guitars create an enormous density, the pace is often rough and the voice reflects pain, contempt for humanity and idiosyncrasy. Sometimes the one or other wonky vocal line appears, but that seems to be intentional and gives the work its own touch. From time to time, melodic guitar sounds emerge and transport a Scandinavian melancholy that is familiar to each of us who has ever survived in the forest far away from civilization for at least three years at a stretch (so probably everyone of us...).

Shamaatae remains true to himself in every respect. Consequently, Kostogher is also less captivating with outstanding individual tracks, although of course more or less every song is absolutely worth listening to. What is decisive, however, is once anew the overall impression of the album, which again offers a rather personal form of Black Metal. Occasionally, influences from outside shimmer through: 'Bedrøvelse' could also come from very early Darkthrone with a black coating. However, the endless, restless and massive guitar lines sound independent, pure and clearly defined. Sometimes, in the particularly unbridled moments, it seems as if the guitars want to overtake themselves. No doubt, this album has nothing in common with depressive, suicidal or any other form of rather defensive black metal.

A handful of guest vocalists and the occasional appearance of a violin support the artistic expressiveness of Arckanum which culminates in songs like the ardent 'Yvir Min Diupe Marder'. A rumbling thunder sounds sweet in comparison. And it can be stated, as with so many records, that the first half of the album (nostalgics speak of the A side) has the edge over the second section. Nevertheless, the whole album is fascinating, because it lives the spirit of its genre in every single second. The creative potential of the lone artist still had a lot to offer in 1997 and the journey that began with Fran Marder became increasingly exciting.