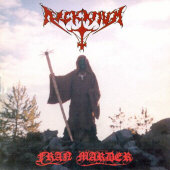 Arckanum was run by just one artist. Shamaatae mastered the instrument “everything”. In this comfortable situation, he did not need to discuss his ideas with anybody else. Instead, he just released a remarkable number of albums and then he went back to his cave and switched off the light. But it was a long journey from Fran Marder, the debut, to the final day of Arckanum – and this journey began promising.

Fran Marder deserves the attribute “monolithic”. It creates a dense, homogeneous and opaque atmosphere right from the beginning. Its single songs are important, of course, but the main focus is on the album as a whole. The storm breaks loose after the intro and nothing stops the artist from wallowing in endless, pretty cold guitar lines. The album from 1995 does not show the almost absurd level of total misanthropy and hostility that was captured on Darkthrones’s “Transilvanian Hunger”. But generally speaking, the approach of the here presented songs is not far away from the eight documents of vileness Fenriz and Nocturno Culto offered in 1994. 'Kununger Af Þæn Diupeste Natu', to name but one example, with its restless drums and the bloodthirsty guitar leads builds an easily recognisable connection to the pieces of the Norwegian classic.

Of course, the shaman acting here is close to nature. That is why there is not only the concentrated studio power of electric guitars, but also short interludes with rippling water and similar sounds. But of course, the sound of the album is determined by the guitars, which are – with the exception of 'Bærghet', a pretty strange number with fairly inappropriate melodic female vocals –exclusively performed at a rapid tempo. The rushed-sounding voice of the main protagonist (as well as the female vocals that also appear in 'Trulmælder') and the drums are not neglected, the rest plays no role. By the way, the extraordinary and impressive 'Trulmælder' proves evidence that the integration of a female voice can be a good idea, because here the melodic approach contrasts very well with the menacing wall of sound of the instruments.

The album is not overly atmospheric. The restlessly advancing guitar leads are like a skin of steel and Fran Marder almost sounds mechanized. But it is a well-oiled and effectively working machine I am listening to. Even though 'Bærghet' floats in its own spheres, the machine does not begin to stutter. The song material is simply too strong. No doubt, Fran Marder was a promising debut without lacklustre tunes. An interesting journey had begun. (Final note: the re-release of Debemur Morti displays eleven instead of nine tracks, but don’t expect bonus material. The difference is based on the fact that intro and outro are shown separately.)