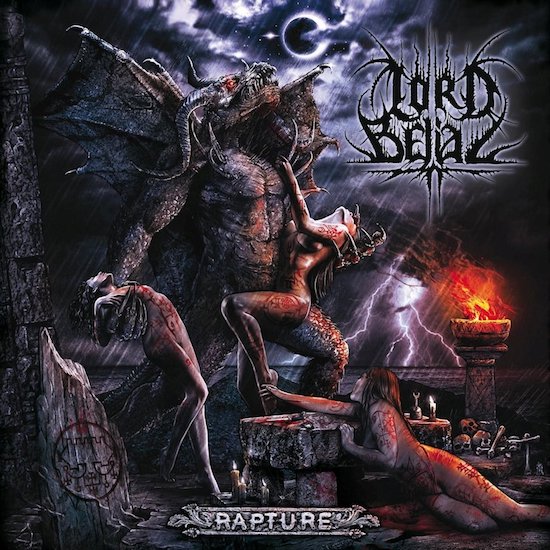 I was much excited when I read the news that Swedish black metal legends Lord Belial are going to release a new album called Rapture in May via Hammerheart Records (by the way a great year for the Dutch label with their new releases!). I was pretty sure that this would never happen again and I was even happier I was when I got the album in my mailbox.

Having a glimpse at the gloomy demonical artwork done by Mike Hrubovcak the listener cannot expect too friendly and positive music on the 9th album by Lord Belial. It was produced by Andy LaRoque and I would say he did a very good job with this. On Rapture you can find a cold but not too sterile production which creates a very nice black metal atmosphere on it. Musically it is as if the Swedish trio hasn't been away for 14 years. They haven't changed anything in their style and perform these harsh yet melodic sounds they did on their previous albums still. Some acoustic parts (like in 'Rapture Of Belial') enlighten the dark tracks a little bit and create this very certain atmosphere the guys have always were able to create.

'Destruction' starts with a thunderstorm intro followed by a demonic shriek. It is a pretty fast track with some hateful vocals and typical Swedish black metal riffing from the 90s. 'Lux Luciferi' is another fast track with powerful drumming, massive fast riffs and a very interesting and melodic break. 'Evil Incarnate' is a nice mid-paced black metal stomper which is one of the catchiest tracks on this album. 'Belie All Gods' has a very cool Gregorian choir in the background and some clean guitar parts that gives this track a certain epic and majestic atmosphere. All in all the album is very much varied which doesn't mean that it is somewhat random.

All the tracks fit perfectly into this frame Lord Belial created with Rapture. I belive that they did a fantastic job with this album and I can say that they fortunately for us did not change the slightest thing in their compositions. All tracks are full of energy and hatred and want to be explored. Although the songs appear to be quite easy to listen to, I still find new aspects in them that I wasn't aware of before. Even Thomas´ voice sounds as fresh and sinister as it did in the past. Maybe they could reveal their trick to me on how to stay that young all the time.

Lyrically there is much to tell about the tracks and if you want to know what they're all about, check the upcoming interview I did with Pepa. He gave me very detailed answers about all of them!

If you liked Lord Belial in the past, be assured that you won't be disappointed by Rapture. Here you can find all the trademarks they used in the past and you won't be surprised in any negative way. What did Euronymous and Deathlike Silence Productions postulated in the past? No fun, no core, no mosh, no trends!