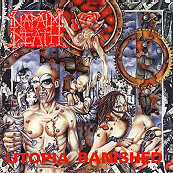 Follow-up from the supremely monumental Harmony Corruption release, Napalm Death seemed to have a more polished production sound quality to this one, but fell a little bit short in the musical department. Since we're talking death metal/grindcore here, I'd say that this album was mostly a death metal type of release with grindcore mixed in where the music and the riffs were not as noteworthy as their predecessor. The music didn't stick as well, a combination of bar chord licks mixed in with heavily tremolo picking as they're so well known for, but this one kind of dragged on with nothing really flying in at a "utopian base."

With Mick no longer behind the set, Danny's 1st full-length attempt to match Mick fell somewhat short on the set. The music was to me B- material, nothing that Mitch and Jesse (RIP) could really come up with that really baffled me. Barney's vocal outputs also were a bit different, a sort of echo to his burley vox, they weren't as deep. That's why I don't like much of the more recent material since he doesn't have that same burley sound as he did on his debut. The nickname Barney doesn't fit to him anymore because of this reason and I think Napalm Death fans would have a similar opinion of his sound is especially in the more modern releases.

There were just a few leads, but well composed, however they've never really emphasized them mostly just rhythms. I think it's better that they don't since the grind is enough tremolo picking in itself you don't want to have the music muddled out with blast beats, tremolo pick, leads and vocals all at once. You do get some of this here, so it sounds more like just noise. If I really wanted true noise, I'd revert back to Peel Sessions. In any case, the album had a big emphasis on lyrics, their anger and rage is brought on by the hatred regarding politics as well as other views, so yes, the aggression stood forth strongly and managed to be a decent listen to.

I would have to say that the music was the highest emphasis on the release and some of the riffs were really catchy. The production wasn't flanked with much reverb as on previous albums and I think that it seemed to have a fresher sort of composition as opposed to a sort of "fuzzy" type of tracks. In that sense, this album is strong, though the last track should've been omitted. It didn't really suit the intro, kind of like it should have been. I'd say that it did fall short in that aspect, but there is so much good to say about the album despite its imperfections. I sort of lost interest in the newer material not only because Jesse and Mick aren't in the band anymore plus Barney is not sounding like himself anymore.

Despite what I threw out there, as a follow up from the classic Harmony Corruption, this one is good, but not nearly as good. Listen to both albums and compare, you'll see that I'm not wrong in saying that Harmony Corruption way surpasses this one by a bunch. I sort of got the vibe that they went downhill from here and the earlier grind days with Mick in the band are a thing of a distant past. A tragedy to lose Jesse forever and that Mick going his own way and done with the band completely after Harmony Corruption. So, listen to both but I don't think I'm wrong in saying that this one is good, but nothing outranks it's predecessor.