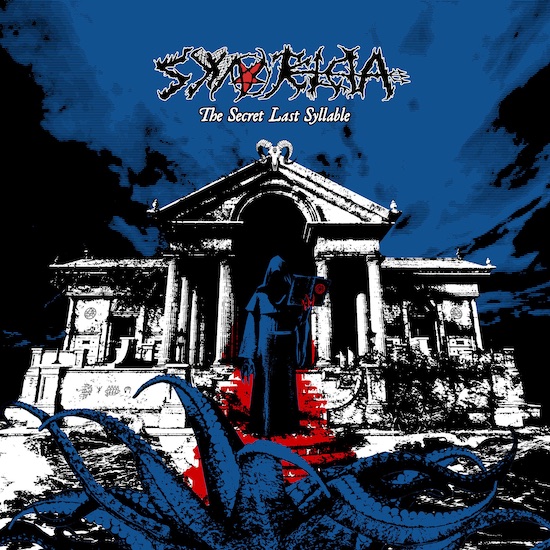 Having showcased all the penchants of Greek black metal and wearing their influences on their arms, Synteleia released their second album The Secret Last Syllable. If you've been keeping up with Greek black metal for let's say the last 5-10 years then this latest installment from Synteleia will leave a good lasting impression on you easily. Very reflective of Necromantia, Varathron and Rotting Christ, this album hits all the key notes to convey a sincere Greek black metal output.

Largely atmospheric from the very first tones heard on 'Tower Of Koth', The Secret Last Syllable announces itself as a direct offspring of Greek black metal, yet apart from the traditional sound associated with the geographical take on the genre, Synteleia offer an album that has depth rather than being a carbon copy of the ones before them. It's an album that sets the stage with ease but one that also takes a few chances, whether it be on 'Harvest The Forest', the title track 'The Secret Last Syllable' or 'Nymph Of The Pyramids'. As far as detailing what those chances are, I'd rather let you experience them yourself.

I've listened to and enjoyed the bulk of The Secret Last Syllable and while I'd say I find all the songs to be great with high replay value, 'Escaping Atheron' for some reason sticks to me as the best amongst the bunch. Maybe it's the synth merged with the mid paced rhythm guitars and drumming or the theatrical feel it evinces or perhaps it's a combination of both, this track is exemplary and takes one back to the mid 90s early 2000s. This song just spells out journeys and is an essential centerpiece of the record along with runner up, 'Emblem Of Yith'.

Synteleia is just awesome, they exhibit their wealth of knowledge that translates through the synth, riffing, drumming and vocals, they've been around the corner more than a few times and when you're countrymen with the maniacs behind Rotting Christ and Varathron there's no excuse to not excel. The text book is in the backyard and it's evident here on The Secret Last Syllable that Synteleia has more than peeped into it. This screams 90's so much that you'll forget the year you're in, and probably go looking for your walkman and a cassette version of The Secret Last Syllable.

From the Greek stygian depths Synteleia is rising up once again to cast their second spell upon us. So we are invited to a gloomy trip of Lovecraftian horror and insanity. The Secret Last Syllable continues where the Greek quintet ended with their first album. This means that they have developed quite a lot since their last output. Of course you still can find all the typical trademarks that Greek black metal makes so interesting and quite unique but the guys have also changed some aspects of their song writing.

You do find the spirit of the early 90s here (a lot of the arrangements remind me of the first two Rotting Christ albums or early Varathron, especially the great atmospheric parts) but in some parts I also get reminded of some Norwegian black metal bands like Darkthrone. The female vocals are quite similar to what they did on Goatlord and we have a little bit of old Mayhem and what they did on "De Mysteriis Dom Sathanas" (the beginning of 'The Last Secret Syllable' reminds me quite of “Freezing Moon”), too. Synteleia also had these female vocals on their debut Ending Of The Unknown Path but they use it quite more often now than on their debut. Nevertheless not all is just traditional black metal on The Secret Last Syllable. You can also find here and there some more classic heavy metal influences in the guitar riffing which makes it all in all a very diverse and interesting album.

These classic parts are clearly to be found on 'Emblem Of Yith' which is a very atmospheric track with a great suspense. Another very remarkable track is 'Nymph Of The Pyramids' which is divided into two parts. The first part is quite fast forwarding Hellenic black metal, part two is catchier with impulsive rhythms and more atmospheric parts. 'Escaping Atheron' is a track that leads you straight back into the spirit of the 90s. The keyboards and the riffs are pure nostalgia, just to mention some of the 9 tracks in more detail.

Well, you might have heard all this music in one or another way but what Syneteleia is doing is to combine the old tunes with a new, quite fresh painting. It doesn't sound like it is copied from another band but appears as a very unique and well thought through album which proves another time that the Greek black metal scene is quite vivid and a creative source.

Rating: 9 out of 10 mountains of madness