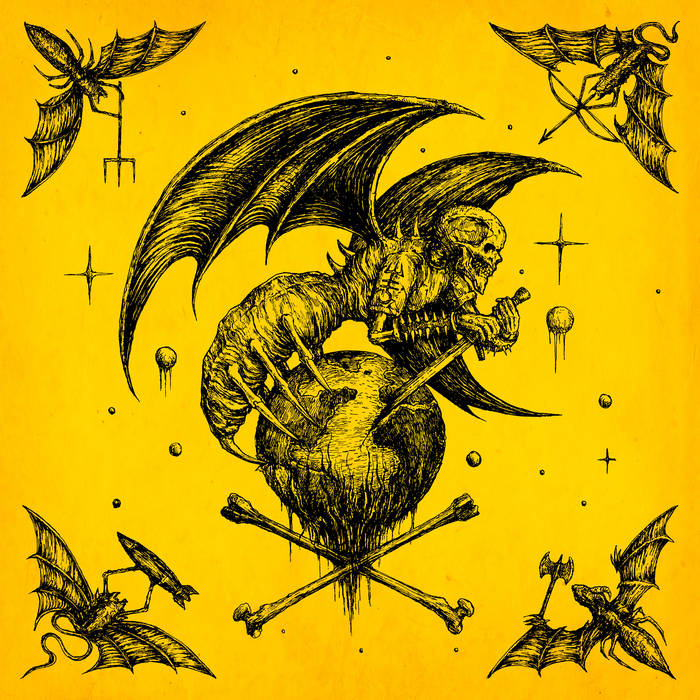 Although they seem to be the subject of a fair amount of online chatter from the underground cognoscenti, I have to say that Downcross were totally unknown to me prior to this album. Clearly, I need to get my ear closer to the ground of the Belarusian black metal scene, which I will confess has somewhat passed me by, at least in comparison to some of their more illustrious neighbours, not least the currently embattled Ukraine. If they are also a new (and not totally inspiring, it has to be said) name to you, I would urge you not to let the band pass you by, as Hexapoda Triumph is a superb release, full of memorable moments, even without the huge contribution of the oddball invention and ingenuity that serves elevate the record to the higher echelons of 2022’s black metal releases. Perhaps it is because of their relative isolation from the Western European and Scandinavian scenes, but there is an uncontrived weirdness to the Downcross sound that makes their songs compellingly unusual, without ever straying into avant-garde, or dissonant territories. Take second track ‘Trumpets Salute The Demise Of Death’, which enlivens its otherwise conventional black ‘n’ roll riffing with some warped string-bends and what sounds like whammy-pedal screeches, which combine with the convoluted song arrangement to construct a leftfield take on Darkthrone, by way of mid-period Satyricon and Nifelheim.

The album has the same arcane quality that you find in records by similarly esoteric artists from Eastern Europe such as Root, Negura Bunget or Master’s Hammer, a quality which makes it recognisably black metal, but played by musicians who are coming to the form from a completely different perspective and alternative history, producing a natural, but utterly bizarre take on the form. Downcross happily merge NWOBHM-style riffs and thrash grooves, all criss-crossed by brittle tremolo runs utilising unfamiliar intervals and scales. The combination of all of these factors bring a singular flavour to Downcross’s truly unique sound. Most gratifyingly, the album is also an absolute haven of headbanging riffs – the metal quotient is considerably higher than on much of the more experimental or atmospheric black metal that is so popular currently, and while that means that the record has something of a throwback nature, it is a throwback to a particular atmosphere and sonic aesthetic, rather than an indication that the band are in any way attempting to recreate something whose time has already passed. Even within the comparitively simple framework though, there are layers of guitar harmonies and melodies which brings a subtle complexity to the material that repeat plays really draw out of the mix, and in many respects, the album perfectly balances the visceral thrill of scything black metal with less immediate, but equally important touches of magic, bringing an intrigue and mystery that will ensure that the listener keeps returning to what is a startling and enthralling album. Hexapoda Triumph shows that the underground still contains some unmined gems, and it will enrich the life of anyone who searches hard enough to uncover a real treasure.