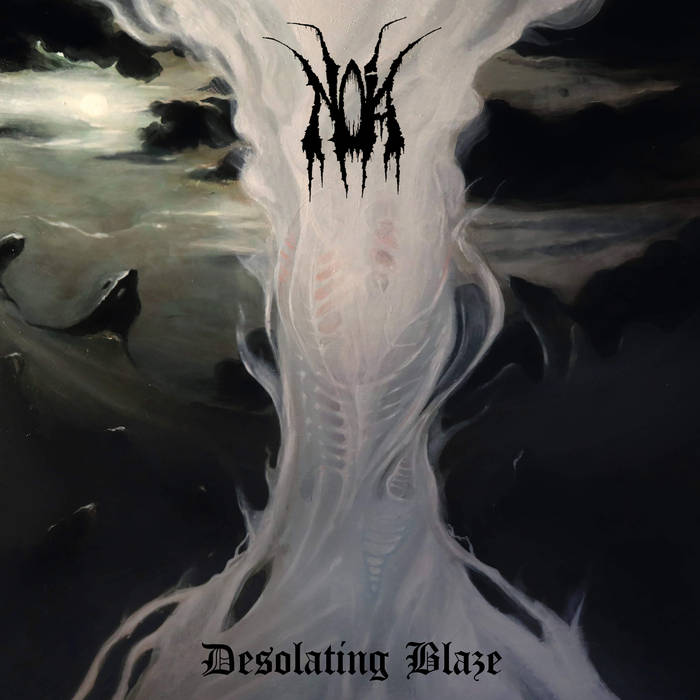 When I got the promo in my mailbox, I thought that Italian trio Noia was a newcomer in the metal scene. To my surprise I had found out that they've already released five albums before their newest release Desolating Blaze which will be published on April 1st via the German label Bleeding Heart Nihilist Productions. So I am asking myself why don't I know this band yet. By the way, Mirko de Domenico is the drummer in Bunker 66.

First of all, I have to confess it is not because they play some generic metal stuff. The guys kick ass from the beginning and got me into it instantly with their music. What they are performing is some kind of black thrash, quite raw and brisk but also very melodic and catchy. Vocalist Lorenzo Bellia reminds me quite a lot of German Warhammers vocalist Volker “Iron Lung” Frerich (R.I.P.). The rasping and deep throated voice sounds very ferocious and underlines the aggressiveness of the six tracks on this album. The riffing is quite simple, not too many solos or technical finesses (okay, still 100% better than my guitar play) but if you like bands like Aura Noir you won't be dissatisfied with the stuff the Italians offer. Most of the time the pace on Desolating Blaze is mid-tempo and only sometimes they increase the sppeed a little bit. But it's not just modern black thrash on here but also a lot of Celtic Frost vibes, only a little bit more groovy and uglier.

'Tyrant Of Doom' is a very good example for the above mentioned trademarks. Fast drumming / riffing at the beginning turns into a very casual mid-tempo stomper with a catchy mid part that could have been on my favorite Celtic Frost releases “Morbid Tales /The Emperors Return”. 'Eternal Cycles Of Death' also starts with a raging tempo but calms down after some time. Then the band creates a darker atmosphere with some church bells and doom-laden riffs to increase speed afterwards again. This is really great black thrash stuff without any compromises or trendy influences. The most outstanding track in my opinion however is 'Disappear Into Nothingness'. It is the most atmospheric track on the album with some haunting keyboards which remind me a lot of what some Scandinavian black metal bands did in the middle of the 90s. Combined with some Swiss riffs again this track creates a very interesting individual touch. I have to admit that I cannot find a track on the album from which I could say that it lacks quality in comparison to the other ones. All in all the total running time of about 38 minutes is passing very fast.

If you want to be entertained by a very good black thrash release, I can highly recommend Desolating Blaze to you. Oh, and if you're asking yourself what “Noia” means – it is the Italian word for boredom. But this is something you won't find on this release!