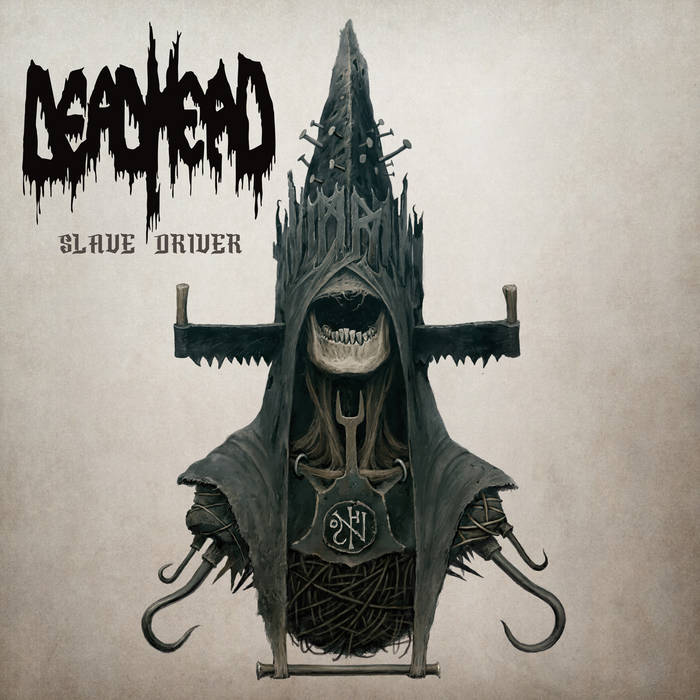 Wow, that was pretty fast - at least for Dead Head standards. Five years after their last album Swine Plague the friendly Dutch quartet is releasing a new album called Slave Driver via Hammerheart Records. It is their 7th album already and still I am convinced that the guys are one of the most underrated thrash bands ever. They never released a weak or boring album in my opinion and what they do is pretty top shelf music.

So Slave Driver is no big surprise at all but if you like what they did in the past +30 years you will love their newest output, too. There have been some changes concerning the band because their vocalist Tom van Dijk who shouted on a lot of their albums quit the job and was replaced by Ralph de Boer. He was their vocalist since their 2009 output Depression Tank so he should be known for most already. Besides he is the vocalist in Dutch death metal band Bodyfarm, too. But I would say that you don't notice the change too much. Ralph is screaming as brutal and aggressive as Tom did on the albums before. Good hateful work!

Apart from this line-up change there are some slight changes in the music, too. The general style is still very fast and aggressive thrash metal but here and there some more death metal arrangements have found their way into the song writing. Listening to 'Polar Vortex' for example reminds me quite a lot of Malevolent Creation in the very first tunes of the song. The aggressive parts which go along with some groovy thrash elements and some pretty brutal breaks make this all quite surprising. After having listened to Slave Driver several times now, I have to admit that I think that they play much more without compromises than they did on the previous albums. The Kreator-influences are mostly swept away and instead of them they focus more on old Sadus riffing (if one wants to do some name-dropping for the case that you don't know the band yet). The album offers mostly high-speed thrashing without any trends or unnecessary melodies and tunes. Only one track namely 'Grim Side Valley' is a little bit slower than the rest. This is THE track which would sum up their previous albums best, I would say. Here you can find groovy, catchy mid-paced riffing with very cool pacing drums that create a nice banger. But actually I don't want to go into detail with any more tracks here because they all are outstanding and entertaining and are really worth checking out.

Also the production is good work by Erwin Hermsen who was also responsible for Pestilence, Trouble or Malevolent Creation (here we go again with that name…). It's a well-balanced and it is kept very warm and not sterile which gives Slave Driver a perfect atmosphere. The cover designed by Vladimir Chebakov is a very cool one too; I was pretty surprised to see this. Quite unusual for Dead Head but a good decision!

Let's hope that the album will give them finally the publicity they have earned after all these years thrashing more or less in the underground!