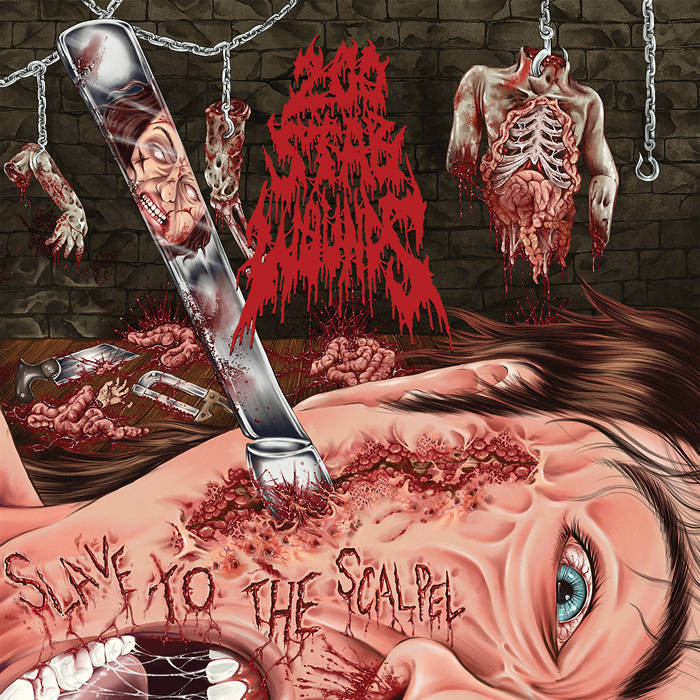 Man, oh man… talk about some good fucking death metal. It might be easy to dismiss 200 Stab Wounds as just another knuckle-dragging groove laden death metal band with "no substance," but I'd argue these guys have much more balls than 95% of death metal bands to form in the last 5 years.

Slave To The Scalpel surely isn't breaking any new ground, but goddammit these guys kick some serious ass. Each song is overflowing with tight, meaty riffs, inspired by multiple different types of death metal, including but not limited to Autopsy, Suffocation, Cannibal Corpse, Morbid Angel and Entombed. Riffs come and go, each one kicking you in the gut harder than the last until you're left doubled over on the ground gasping for air and begging for a break from the relentless beating of chunk and grit.

The production is fantastic! The guitars are beaming with life, both torrential and devastating, the bass is thunderous and has a tone that could shatter the Earth, the drums are lively and pack a serious punch, and the vocals… nothing insane, but this guy definitely sounds pissed off as fuck and gives the music that extra layer of aggression that makes this type of death metal so ugly and addicting. The mix job is stellar, everything is clear and audible and nothing ever feels drowned out.

The songs are short, relatively simple, but they don't need to be complex… the whole point is to get in, beat you up for 27 minutes and spit on your unconscious body and walk away unscathed. It's heavy as fuck, and that's what we're all here for at the end of the day, right?

If you're sick of bands trying to be super atmospheric or super technical and progressive, give this album a listen. It's short and powerful and will have you coming back for more time and time again. Just don't let your guard down… it'll choke the fucking life out of you if you're not careful.