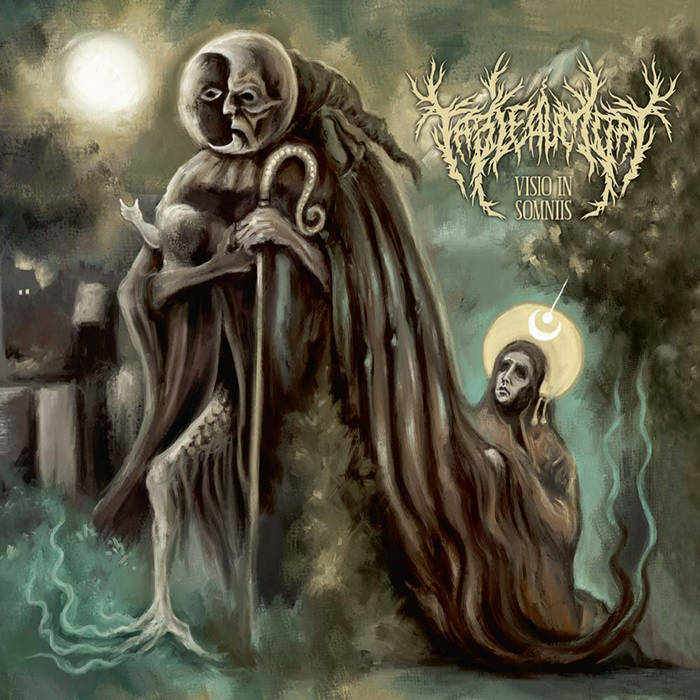 British black metal band Tableau Mort has released their sophomore album Visio In Somniis through a local label Cult Of Parthenope in early May. This band established itself a couple of years ago, when their debut album Veil Of Stigma. Book I: Mark Of Delusion shook the murky waters of underground black metal. Nothing life-changing didn’t happen back then, but nonetheless black metal enthusiasts kept in mind these English performers with a big potential.

Everyone is so blasé and world-weary about yet another one black metal name, the scene is overcrowded, and even the most talented musicians face challenges to announce themselves at a decent level. But the digital era also helps a lot of bands in spreading their art. Many of these young bands have brilliant ideas, but struggle with mastering or recording problems; many of them have too traditional and predictable ideas, but with excellent sound quality; but there are some bands that can offer not only fresh ideas and competent realization of them, but also acceptable arrangements, sound quality and mastering. Of course, when you have a solid experience in other metal (or nonmetal) bands, it’s much easier to produce high quality in everything, and musicians from Tableau Mort have enough of the experience to bring their best into this elaborated and cherished extreme metal project.

Visio In Somniis undoubtedly belongs to the ice-cold realm of black metal, but under this thick foundation we can also see some intriguing surprises. Maybe it’s a bit early to glue the word “avant-garde” to this band or simply relocate them to the experimental metal area. But with every new album we can witness a continuing trend of progression and these structural technicalities and multi-layering create an aftertaste of something unique and beyond the traditional. It’s interesting enough to observe how these little changes entwine the purest forms of BM, slowly getting outside its comfort zone without dogmatic stereotypes. And there are also a lot of progressive hints, responsible for general sophistication of the sound and smart muffling of the most primitive parts.

Visio In Somniis doesn’t lack melodies, quite the opposite; the songs sometimes are soaked in an audible harmonic melodiousness, familiar to mdm movement. But considering all the discorded elements and ragged technical structures, those melodic reprieves are quickly cornered into the background. It’s quite a competition, when soft and melodic parts are opposed by dissonant and chaotic; it’s amazing how these severe Englishmen have managed to combine pure traditionalists with unorthodox and eccentric ideas. We can also rely on something DSBMish right here ('Blood Echoes' and 'Their Throats Are Open Graves'), but the level of desperation isn’t through the roof, rather giving way to melancholic and sad flows (but without gothic sweetness). The title track 'Visio In Somniis' also has some references to alternative metal music, with modern and straightforward touches.

'Idolatry' and 'Their Throats Are Open Graves' confidently lead to oriental and world music, thanks to guest musician Berrada Med Akram and his mesmerizing violin and fiddle. The female voice of Janina Kiessling also invites us to middle-eastern domain with her ritualistic and ethnic chanting. However, Laura Delogu brightened 'Candle In The Darkness' with a more classical singing manner, carrying away all the messy avant-garde and disharmonic patterns. But their permanent singer James Andrews also didn’t fall off the turnip truck, using his vocal cords and steadily expressing his feelings – from chanting and occult technique to howling and desperate screaming. Keyboards sometimes create mournful and slightly symphonic background, as well as froufrou solemnity. The pace of the album also varies and doesn’t follow strict rules, sometimes switching to an abnormal pace, but sometimes slowing off to an ambient tranquility. The strangest thing on this album belongs to guitar solos, so old school that it seems like the glamorous and hairy singer will jump out starting to sing in falsetto. Yeah, probably in those we can hear some traces of their fondness for good old hard n’ heavy (but actually who doesn’t like classical metal?).

Despite following black metal rules regarding their lyrics, choosing the religious motives, Tableau Mort don’t stick only to historical references, but also dig into more philosophical and creative topics of self-development. The same can be applied to their artwork, full of religious and historical clichés, but also with symbolic and mythological glimpses. Tableau Mort are inexorably gaining the confidence on the black metal scene, and although their flirtations with experimental side aren’t quite profound yet (not at the level of DeathSpell Omega or Blut Aus Nord), we can see even with their second record, that they are definitely moving forward towards this labyrinthine and unexplored territory.