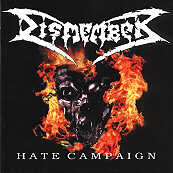 I think that this album is highly underrated, though they didn't progress as much as was expected from their earlier releases, but there still were moments on this release that are really melodic as well as intense. Sure the quality of the lead guitars are a little in question, but still I thought they did good with them. I think that the album is still intense with those intense guitar riffs, but not as memorable as the earlier releases. The guitar is still down there in B-tuning i.e. the "Swedish" death metal guitar tone is there. I don't think that they fell short in the songwriting, I think that they just fell a little short on the quality of music that they dished out here.

Hate Campaign is a slower album here rhythmically, but I still think that it's quality. They really do a good job at riff-writing, creative with their sound and this one is still melodic featuring heavy guitar chords throughout as well. They take the rhythms a lot of the time then will have a lead guitar playing melodically around that, not just a solo, but a melody. This occurs during some songs, though it's not on every track. They really give you a sense that they're not giving up their Swedish sound nor being a melodic death band, just a band that likes to use melodies along with their brutally heavy sound. The reissue that I got had some bonus tracks that they recorded, but were only mediocre in quality.

What do I make of this album since I'm sounding contradictory? Well, this album is no Like An Ever Flowing Stream or Indecent and Obscene, but it's still quality death metal. The main tracks, not the additional ones are well produced, the guitar riffs/melodies admirable, vocals that are hoarse, drums that are pounding away and a mixing that does it justice. I think that this one is way better than what other critics deemed this one as being. Sure some of the solos weren't the best, but I still thought that they were good. The guitars are what make this album the most memorable. The music is what's quality on here plus it seemed as if tempos were fluctuating.

Most of the songs on here musically were moderate tempo-based, however, they vary. They chose to experiment with sounds and melodies. The bulk of the guitars focus on a lot of bar chords with some intense tremolo picking. They really did include a mixture of slow, medium and fast riffs, but mostly eyed to get their music across by using a lot of chords and palm muted riffs. This by far is not even as near as intense of their earlier material, but it's still good. Just the reissue bonus tracks are the only beef I have against them. If it were just the LP itself, then I might've given it a little higher of a rating. You get quality music on here, it's just not your totally typical release of theirs.

Are you still in doubt? Well, my advice would be to listen the album before you do anything else. Don't go by what other people rated or reviewed from the album positive or negative, go by what you hear on YouTube, then you'll conclude if it's something that you'd want a physical copy of theirs. I chose to get the physical copy because it's Dismember and I liked what I heard before from this album, so I decided to buy it. Even though they disbanded, they left a great many releases in the metal community with their contributions to it musically. I think that no one should leave Hate Campaign out of their discography. It's worth it!