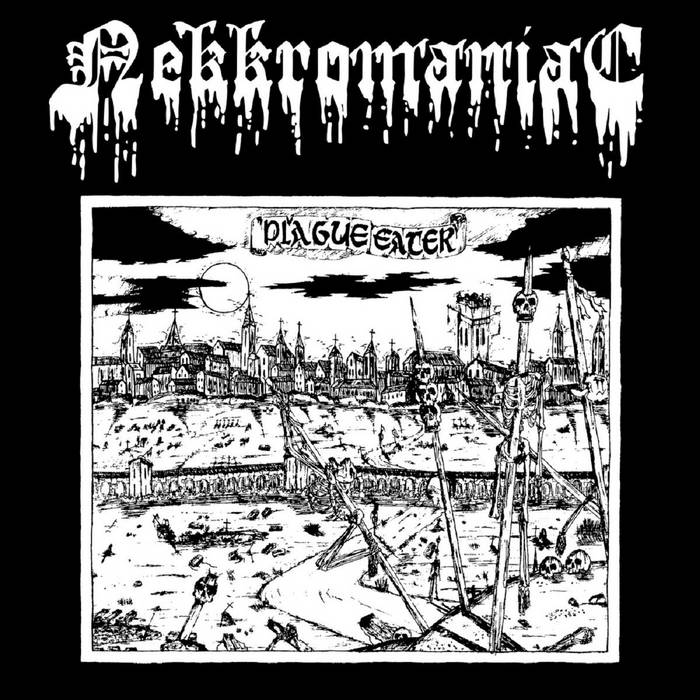 Imagine a car race in which a driver competes in a 1985 Porsche instead of a hyper-modern racing car. Chances of victory? Zero. But, good news for Nekkromaniac from Germany, metal does not take care of technical data. There are no rules and it is not forbidden to revitalize the early days of extreme Teutonic outbursts. The material of Plague Eater is as old-fashioned as it can be, its level of innovation cannot be described, because it’s simply absent and I’m sure that the musicians characterise 99% of all metal albums released after 1989 as poser bullshit. Additionally, it goes without saying that the raw, slightly blurred, hammering and direct production catapults the listener almost four decades back in time. Sodom recorded “Obsessed By Cruelty” two times and I’m sure a third version would have had exactly the sound of Plague Eater. If it's still not clear to everyone what I'm trying to say: this is a kick-ass album, at least for old geezers like me.

Okay, a serious reprimand must be. The first mid-tempo part sets in after 25 seconds! Wimp alarm? No, fortunately not. The bands jumps headfirst into the album and even the less speed-dominated sequences hold every pseudo-metal-maniac firmly in a stranglehold. Filigree riffs are absolutely forbidden, keyboards only exist to be destroyed before the start of the recording session and female vocals? Hahaha, did anyone hear such shit on “Endless Pain” or “In The Sign Of Evil”? Even the techies from Destruction refrained from such frippery, but probably also because Schmier himself sometimes sounded more girly than Sabina from Holy Moses. Either way, we don’t want to speak too much about the old heroes, but put the spot light on those who carry the torch of eighties metal into the future. Nekkromaniac deliver pearls like 'Pit And The Pendulum' (old Edgar Allan never dies!). It’s expressive chorus is characterised by the vocals. The usual nagging is replaced by roughshod cries reverberating in my brain. Even after the death of legions of brain cells, it is impossible to forget this chorus again.

This song is just the tip of the iceberg. Okay, the band is not totally immune against a few standard parts (scale up, scale down, both in hellish tempo). But that’s no problem for me, because attitude is more important than musical perfection. Nekkromaniac know their game, their frame and their aim. Better still, they have the technical skills to execute their ideas in a very proper manner. Given this fact, the horde scores with a tight performance. And every now and then, they even surprise with an unexpected break. 'Sacrifice' tumbles into a grinding, medium fast part after the second chorus. It’s great to listen to the wicked riff and the occasional double bass intermezzo. 'Bleed For The Master' – you see, the lyrical content also does not explore new territories – serves broad mid-tempo parts as well and sends greetings to Bathory’s “Blood Fire Death”. So what, which band of this style has not been inspired by the young Quorthon (R.I.P.)?

100% rage, 100% metal mentality and little room for improvement concerning the songwriting: Nekkromaniac are on a very good way with songs like the opening title track or 'Black Death'. This melange of black, thrash and death metal whets the appetite for more and the uncompromising mindset is the band’s biggest strength. If the quartet is able to preserve its fury and its waywardness, we can enjoy further trips into the past. And it is absolutely irrelevant whether the Porsche wins the race. It’s just great to drive such a stylish, timeless car.