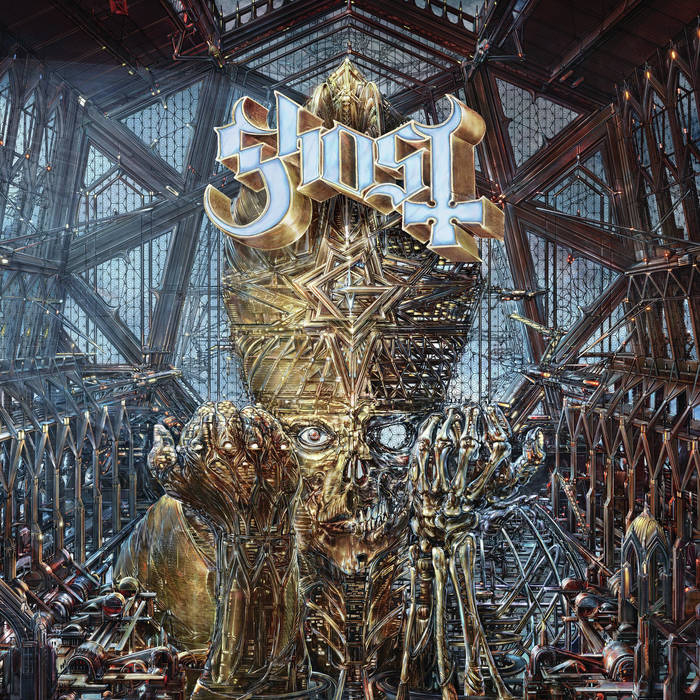 Ghost – I guess there are just two opinions that one can have. One is to absolutely adore them and the stuff they do and the other one is to hate them for some incomprehensible reasons. I have to admit that I have loved the band since their beginning when they released Opus Eponymous which was more heavy metal than everything else they did afterwards. Nevertheless the band around Papa Emeritus I-II, Cardinal Copia and now on Impera Papa Emeritus IV aka Tobias Forge in my opinion always released superb and entertaining albums and EPs / singles and never disappointed me although the last album Prequelle had to grow until it fully found a place in my heart.

So what about their newest output Impera? First of all the cover and the artwork in the booklet was created again by Zbigniew Bielak and is full of lovely designed little things that want to be discovered. If you liked the last ones, your eyes will not be disappointed. As the predecessor was lyrically about mortality and transience the band is confronting the listener now with the decline of world empires, tragic stories in the history of mankind and the decline going hand in hand with all this. This sounds quite visionary in times like these but we also all know that history repeats itself.

Now we have to talk about the music. After a slight calm acoustic intro the band starts with 'Kaisarion' which is a track that doesn't surprise too much. The song is groovy and catchy as hell with sweet melodies and riffing and very memorable vocals and choirs. It is a track which also could have had been on the albums before and that puts the listener into a good mood. 'Spillways' starts with an Abba-esque piano part and here the nameless ghouls around Tobias Forge start to play more soft melodic and cheesy music. Okay, here and there a guitar riff but this one slight at the border to pop music. But this also fits perfect into the whole frame. 'Griftwood' is another track which wraps up some blasphemous lyrics into some pop tunes. This track could also have been on a Boston or Journey album, like some of the others, too. Ghost really know how to write songs that still don't sound too kitschy but also almost unbearable cheesy songs that nevertheless keep attracting the listener to them. Maybe the one or the other remembers the good old Greek sirens. I guess Ghost is the modern resurrection of them.

On the other side there are these typical Ghost songs that spread this dark but nevertheless warm and somehow comfortable atmosphere with all the technical finesse in the arrangements of the songs. 'Call Me Little Sunshine' has a very dark and doomy basic riff which is kept quite simple but the refrain is so damn catchy and positive that this satanic message almost appears like a persiflage. 'Hunters Moon' is one of the best tracks on Impera in my opinion. Not that the guys do something really new here but they combine a lot of hard rock and pop elements into a very bombastic and memorable song which grows with every listen. And this is the same with the closer 'Respite On The Spitalfields'. Some hard rock tunes meet some 80s vibe and a lot of really heart-breaking guitar riffs that underline the sad message of farewell are quite impressive. I guess it has some similarities to 'Life Eternal' from their last album Prequelle.
But there is also a point of criticism on Impera. The introduction of 'Twenties', namely the short instrumental track 'Dominion' is a dramatic and well-done, almost cinematic piece of music but 'Twenties' is at least for me the weakest track on the album. Here you can find boring riffs that are quite repetitive and monotonous and the lyrics aren't that rousing as well.

So what is my conclusion about Ghost's fifth full-length? First of all I would say that the album is definitely a grower. You cannot open up the album within one or two listening sessions, it takes much more time to fully get into it but when you get that far, my guess is that you will fully appreciate the album. Though it is still not their magnum opus (and I am sure that this will come in the future) the band has taken a further step to a very big popularity. Who knows, maybe the next album will be mentioned in one breath with some Queen or ehem… Abba albums. What did Boston sing? More than a feeling…..

Rating: 9 out of 10 fallen empires