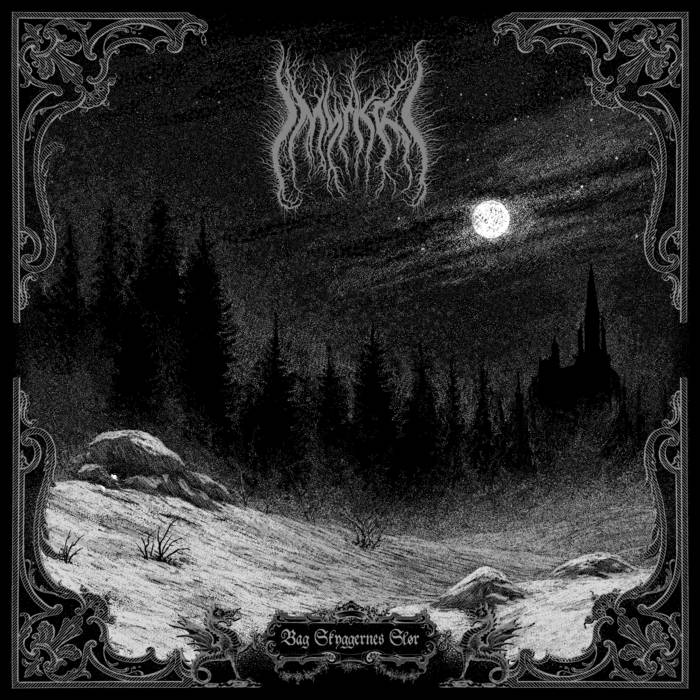 Danish black metal exists in the shadow of the sounds of more productive countries, but that does not mean that dudes from the “hyggelig” country record only second tier material. ĺ Myrkri’s third full-length does not provide reason to rewrite the book of the subgenre. However, it does not need to fear international competition. The duo offers, I can already reveal that much, a solid portion of atmospheric black metal.

By the way, atmosphere is the key word when it comes to the description of the six tracks. The style of the simple but great artwork is translated into music. The songs spread a nightly, rather cold aura. Anyway, what impresses are not so much the single tracks but the record as a whole. Bag Skyggernes Slør relies on uniformity and continuity without being boring. The songs flow into each other without disturbing surprises or even obstacles. Perhaps it's not entirely wrong to place ĺ Myrkri between Inquisition, Limbonic Art and a typical Quebec BM band. These units also focus on the creation of a coherent, only rarely changing moods. Some of them do it in a more competent manner, but the guys from Aalborg also know how to pen effective lines. In particular 'Solens Stund Svinder' convinced me to buy this album. It’s opening lines have a majestic yet simultaneously untamed character and only black metal maniacs with a heart of stone can ignore such an intro (I failed). The density of this song is remarkable. Moreover, it gets obvious that ĺ Myrkri have more aces up theis sleeve than “only” an adequate atmosphere. Their good guitar work also reinforces the flavour of this tune.

Production-wise, the album is less strong than its musical content. It does not deliver a noisy mishmash, but it could be less blurred and more transparent. We do not get a very organic mix, everything seems muffled. This is not to say that the boat of the band shipwrecks; I just think that a less vague mix could have been advantageous to the final product. I am also of the opinion that a less bombastic playtime would have been good. Nearly 55 minutes for five songs and an interlude are pretty long. Not boring, but challenging for some listeners (like me). Maybe this is a general problem: bands who concentrate on hypnotic, encompassing lines exaggerate sometimes. And they cannot hide their influences. I already mentioned some of them, but the art of the Godfather of these sounds also shimmers through. The keyboard tones in the pretty calm part of 'I Stjernernes Vold' tell us that the duo is familiar with the sonic creatures of a man called Varg Vikernes.

There are more aggressive and colder black metal works than Bag Skyggernes Slør. However, the meticulously constructed tracks with their different tempos and their well-connected different parts breathe the spirit of the proliferating genre. I do not know the first two full-lengths of the band so far, but if they have the same quality, I can recommend the entire catalogue of ĺ Myrkri. Only Danish patriots should not get in touch with this output, because it does not have any hyggelig facet.