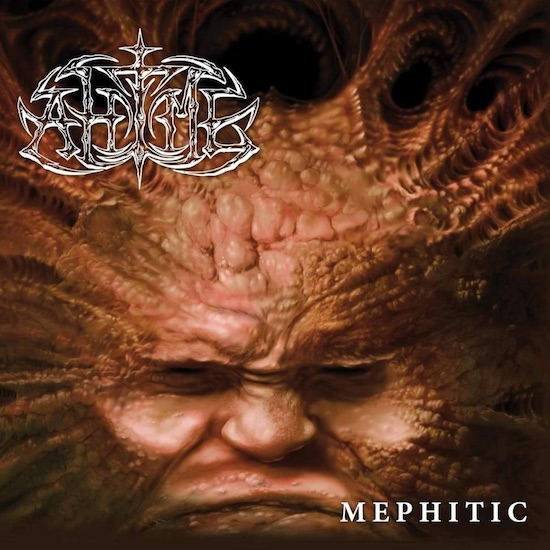 I think a good chunk of tech death fans are completely unaware of Ahtme's existence. This is rather disappointing. I myself knew nothing about them until this album was announced, and then I immediately judged a book by its cover by looking at their last album with the dumb album cover and the name… Ahtme. Whatever that means. Anyway, looks are deceiving. This album came out and I listened to it, and at first, I didn't like it. Then I did end up liking it. Now, I'm pretty close to loving it. While Ahtme isn't recreating the genre of tech death, they do a lot of things the genre is known for very well. For this reason, "Mephitic" needs to be on every tech death fan's listening rotation.

Ahtme is one of those "a little bit of everything" kind of bands. To pinpoint one specific band they mould their sound after would be a tough task; Ahtme's sound is mainly a clusterfuck of influences put together into one complete package. The riffs remind me of what a modern Psycroptic would sound like if they didn't turn to absolute shit after their first two albums. The pinch harmonic use reminds me heavily of Spawn of Possession. There's also a good amount of some other notable bands such as The Faceless, Suffocation, and some Decapitated, but I honestly have barely listened to Decapitated. As you can envision, this is groove-laden tech death that keeps the listener occupied with chunky riffs served up on a silver platter and delivered directly to your skull with a loud smack. I always say that the backbone of ALL metal should be its riffs, and Ahtme has done a good job of writing a ton of memorable riffs that will surely get your neck to move.

As for the lead guitars, there's some noodling but not a lot like one would expect from tech death. The pinch harmonics are absolutely on point on this album though! I love me some well placed queedles and quaddles (yes, this is what I call pinch harmonics on my own time), and on "Mephitic," they've lathered the album with good lead work. Overall, this is mainly a guitar driven album over everything else. The bass and drums are obviously there, but neither one does anything completely spectacular to stand out. The drumming is impressive, but run of the mill for tech death at this point as it seems pretty much every drummer in this genre is superhuman. The bass unfortunately doesn't offer much and just follows the guitar, which I imagine is not an easy task, but alas, it would have been nice to hear the bass make a few more statements on this album.

The vocals are pretty basic. I will say that the vocalist does sound pretty pissed off on a lot of this album and the lyrics match his angry tone (at least the ones you can understand because I can't find the lyrics for this album anywhere.) It's amusing when a death metal vocalist sounds like he had a really bad day and is expelling his anger through inhuman bear growls in a studio over some heavy riffing.

The production and mixing sounds good to me! I've already stated before in my reviews that I am far from a production snob. I honestly am fine with the sound of an album 99 times out of 100. Rarely does production put me off of an album, and this one is no different. Everything sounds full and healthy, and the guitars especially have a wicked nasty tone that reminds me of what a modern Necrophagist would sound like.

It's a great album, in the end. I guess I was a little turned off by it in the beginning because I personally find the second half to be better than the first half - which is always an oddity to me, because I just assume bands put all their best songs in the front of the album to keep people listening. The first half has since grown on me, but the second half, mainly the last four songs, are absolutely killer, man. That being said, there aren't any weak points to the album. Perhaps it's a little repetitive, but it's short so it doesn't get boring. There's no stupid interludes on the album, so I see this as an absolute win in all regards. It's just a fun album. A lot of catchy songs with good riffs and vocal patterns, a solid technical edge and a lively, hearty sound to go with it all. I really can't complain. Put this on your radar if you haven't already heard it and you like riff-first technical death metal. You won't be disappointed.

Favorite song: 'Valley of the Gourds'