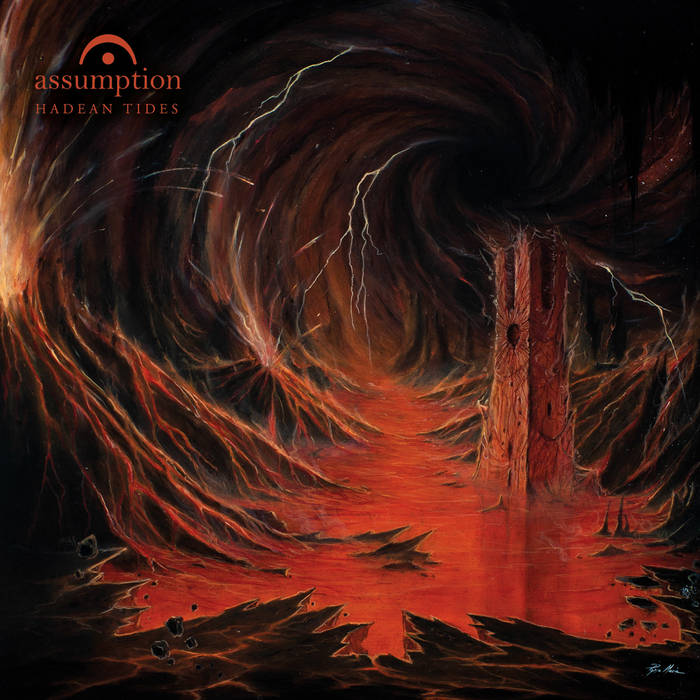 Paralysed in ecstasy, the best phrase to describe the addiction that is Hadean Tides by Assumption. Imagine if Disembowelment formed a death/doom band with Disma, pretty damn sure this is what the final result would sound like. If you've been looking for a near perfect blend of death, doom and atmosphere then you would have found it with Assumption. Hadean Tides is a cracking album, a record that would march over your toes and plaster them to the cold hard concrete without apology. It's dark, heavy and devastating, produced with a smooth sound and will keep you awake all the way through. The sound is adventurous with pinch harmonics, fluctuating tempos and bellowing vocals. The guitars are played with a flare only few have managed to replicate most recently, and when it comes to the overall progression of the record, you won't even know when it's ended. The songs on here will ring in your ears and keep ringing them for years to come.

I was very reluctant to give it a try; my major concern was the album using up 45+ minutes to do nothing. However after the first track, 'Oration', it was crystal clear that the band were no newbies to the craft. They have an album before this but I'll give that a try once I've done spinning Hadean Tides for the millionth time. Assumption has that extra bit that makes them stand out from the rest of the death/doom bands in the underground. Their sound is very mature to say, somewhat gives you the feeling they're a daddy band overlooking the rest of the family. 'Submerged By Hadean Tides' pretty much drowns the listener with guitar leads and undercurrents that support the megaton vocals and the heavy thump of the drum kit. This song hits and makes the statement for the album with a short yet soothing solo that dissolves slowly before the band takes a shift into blistering death metal momentum.

The incorporation is what won me over regarding Hadean Tides, Assumption though using up so many transition patterns never gave off the feeling as though each song was a separate entity from the album, rather making each entry correspond and fit with each other. Thus said, there is one passage that somewhat nearly spoilt the experience for me. It's on 'Triptych', once you hear the track you'll understand why. I don't want to dwell on that as to keep this review positive, but what I will say is the incorporation was unnecessary from my perspective, maybe you would enjoy it but I surely didn't. The latter part of the track however got things back to where they belonged.

I appreciate the funeral doom moments with 'Daughters Of The Lotus' doing a commendable job moving from funeral doom to death/doom also demonstrating more transitioning skills as they shift back into a trance like death metal upbeat. Its smooth sailing from there on as the end with the 14 minute crusher, 'Black Trees Waving' that speaks volumes about the patience and effort Assumption put into creating an album that will live on for decades.

Hadean Tides is an adventurous album that while sounding fresh in the ears of death/doom aficionados, does a great job of sustaining attention and on some occasions, pays homage to the masters of the craft, Disembowelment. Get it through Everlasting Spew and Sentient Ruin Laboratories.