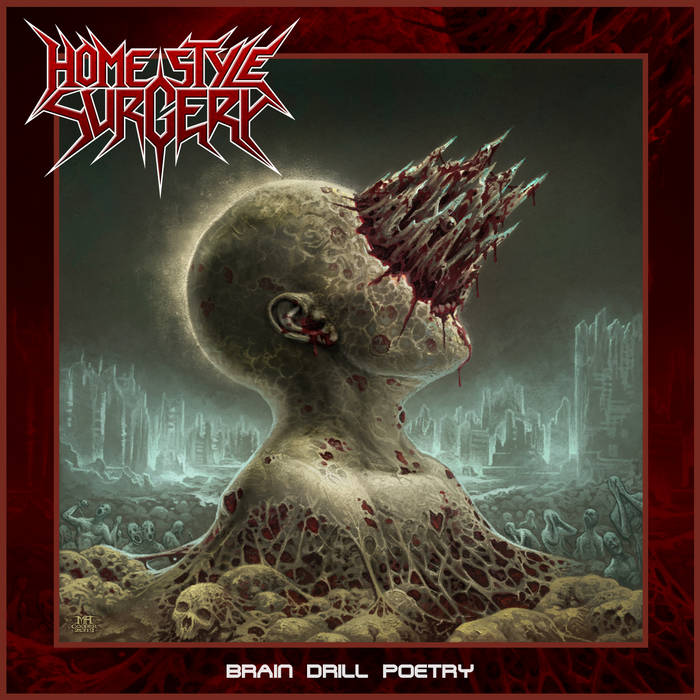 Finland’s furious thrasher Axegressor called it a day after four albums and the slightly more melodic thrashing The Scourger (two full-lengths) did not suffer from an extra-portion stamina as well. Both splits were more or less big losses from my point of view, but now Home Style Surgery send a new, pretty progressive thrash signal from black metal dominated Suomi. Their debut was already a bomb, and now they return with the aptly titled Brain Drill Surgery. Fasten seat belts, we take off.

First things first, if there is any deeper sense in the opening title track with its absolutely opulent length of 75 seconds, I am sorry, because I did not find it. Anyway, before I was able to hate the song, it was already over. Fortunately, the seven “full” tracks that follow show the real skills of the band. Is this Switzerland’s Coroner in rage? Well, the new lead vocalist wears of shirt of the semi-legendary virtuosos and this is a kind of omen for the musical content of the album. But this dude is also the reason why Home Style Surgery appear like the more aggressive brothers of Watchtower. His phrasing and a relatively big number of high-pitched screams and lines reminds me of Alan Tecchio. I enjoyed the work of the singer on the debut, but Kami, the new man behind the mic, also does a good job. Passion, power, vocal range – you will not miss any important element for a good performance.

Home Style Surgery present a wonder bag of bulky, pungent and intensive riffs. Their songs are less ornate than those that made 'Control And Resistance' to the killer it is, but that’s no problem. Maybe it is even just right that way, because I do not have the time I had back in 1989 to decode an album and nobody seems to be able to make me 25 years younger. Therefore it feels great that the five-piece drills its songs into my slowly rotting brain. 'Necrodecoration' shows the way: barbed hooks and accessibility are in a very fine balance. Of course, conventional song structures have not been used, main composer Jussi Keränen loves to explore more adventurous routes. But the guy in the driver’s seat has a fine instinct for the proper number of breaks, tempo shifts and surprising twists and turns and so he wins his personal war against repetitive song patterns in an excellent manner. As a consequence, it does not matter whether you dive into '434' or 'Exit Homunculus', to name just two blizzard-like outbursts. Home Style Surgery do not bore the listener with half-baked tunes (at this point, we neglect the miniature track at the beginning of the song list), everything is meticulously arranged and executed.

Not too mention the crystal clear, in your face jumping production. It creates a fantastic “thrash metal 2022” sound – with full force, but without any signs of sterility. Therefore, the multi-layered 'Surgical Sculpture' ends the disc much too soon. It clocks in at 33 minutes, this is only 75% of the debut… never mind. The band has confirmed its enormous potential. I hope the career of these Finnish lads lasts longer than those of Axegressor and The Scourger.