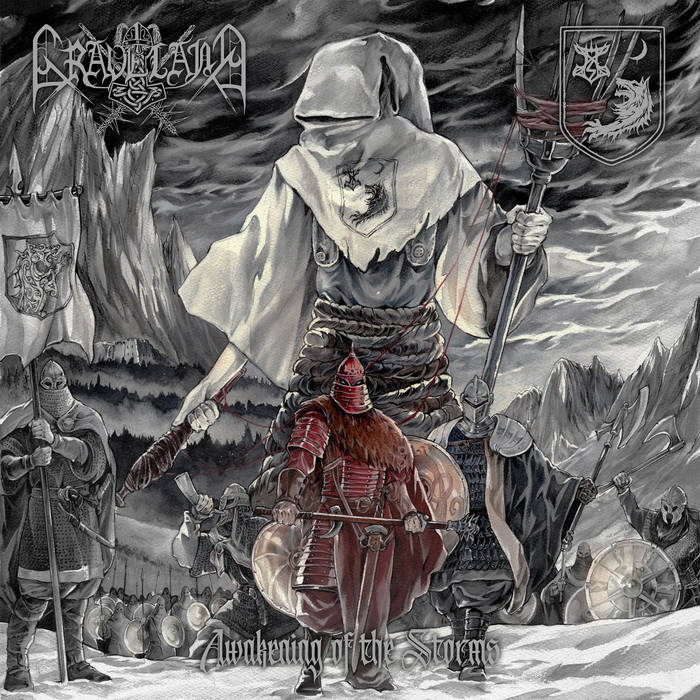 Welcome back to the land of graves where Rob Darken sits comfortably on his oaken throne. After a comparatively long break between "Dawn Of Iron Blades" and "Hour Of Ragnarok", he returns with a split album that follows hot on the heels of the aforementioned work. Naturally, only fools expect a spectacular change of style and one must be an optimist to await a spectacular work at all. Since "Creed Of Iron" at the latest, Graveland’s style has been defined (and became predictable). And so I awaited another typical Graveland offering with plodding rhythms that slowly but surely make their way from the cave to the battlefield and back, with Valkyries voices in the background and heroic vibes that give the music its triumphant yet battle-weary mood. Nothing new in the Polish forests.

The first time I listened to his four new tracks, I felt confirmed. But after three listening sessions, I must say I was wrong. The songs have more layers than I realized. Of course, Graveland still sound like Graveland, but some unexpected details show up. On the one hand, Darken has integrated a few very rapid sequences ('At The Shore Bathed By Blood', 'Possessed By Steel') that give the atmospherically dense songs an extra dose of intensity. On the other hand, he gives room to keyboard lines that sound like In Extremo minus the joy of living ('Amber Lantern'). Everything is presented with another voluminous production which has become a trademark of the one-man-project. The powerful guitars and the throaty voice celebrate their great appearance, the drums deliver the solid foundation and the keyboards – well, they are very (or even overly?) present, but this is nothing new when it comes to Darken’s approach. A little less pathos would be good sometimes, but I ask you to understand that as a side note. All in all, I enjoy a very cool delivery of the Polish lone wolf (yes, I have seen that he has two side kicks since 2020, but I don’t think they have a big influence on Graveland’s sound) and it’s a mystery to me why his music never gets boring, at least in my humble opinion. 8 points for his contribution to this split.

But now let’s have a look at the commander from Finland, another solitary person who has not found any fellow musicians. No doubt, he is more or less a spiritual brother of the Polish pioneer. Commander Agares have a more icy guitar sound and the vocals resonate with cruelty. Some details do not really work, for example the fade out and back in after four and a half minutes in 'Dawn Of A New Morning'. Another minor flaw is the powerless drum sound. Did the guy really beat a snare drum or was it just cardboard? Anyway, the overall impression does not fall victim to serious mistakes. Instead, the artist collects plus points with the ghostly dancing keyboard melody of 'Rising Flames Of Revelation'. It sounds like a harmony early Gehenna forgot to record. Commander Agares do not fish in the waters of Viking metal and that’s the main difference to the art of their split album partner. Yet they also convey a desperate touch and their three compositions do not suffer from a lack of substance. In contrast to its name, the profound and insistent 'Where We Are Crowned As King' does not spread a triumphant aura, it rather sounds like a document of pain and hopelessness. It’s the song which is closest to the material of Graveland and therefore it builds the perfect bridge between the two units. For me, Commander Agares deserve 7,6 points and this means that the very recommendable split gets 7,8 points.