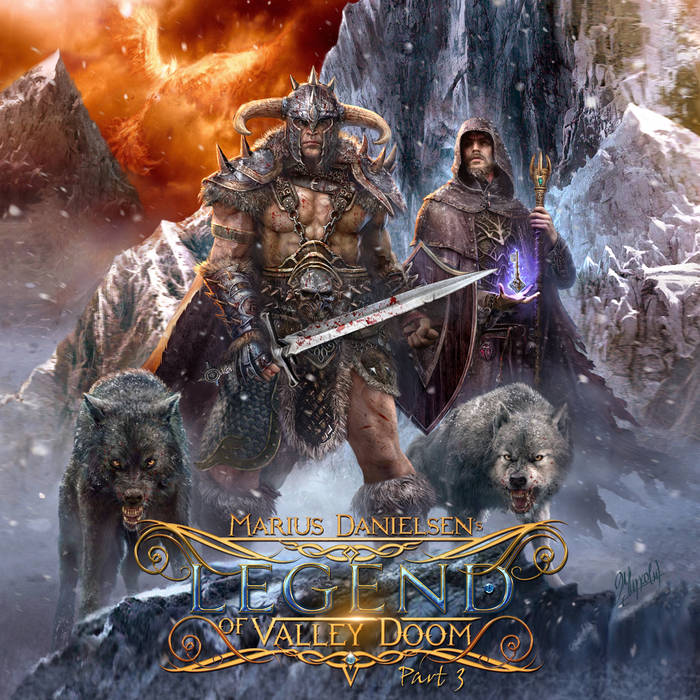 Type: Full-Length
Release Date: May 7th, 2021
Label: Crime Records
Genre: Power, Symphonic
1 Seven Ancient Artefacts
2 Journey To The North
3 The Ballad Of Arnoth The Wild
4 Mines Of Eloroth
5 Battle For Eloroth
6 March Into The Storm
7 Bane Of Lord Cremortius
8 The Sarlinian Bow
9 Deep In The Mountain
10 Tomb Of The Fallen Kings
11 Stars Will Light The Way
12 For Our King And For Our Land

The Danielsen's done it again! With the release of part three of his Valley Doom Trilogy, Marius Danielsen & Co. surely just presented us with another timeless gem that will shine forevermore in the treasure chest that is power metal. Forgive my weird metaphor, but hell, this is an album after my power metal heart.

Nope,you're not going to get any of that modern, syth-driven, keyboard-based power metal sound bands like Beast In Black are trying to feed us these days. Having thrown off the Manowar influence he had had for his fist two albums, Marius turns to the more old school EUPM side, giving us an album filled with bright speedy guitar, steadfast drums and bass, and an underlying orchestra to add to the tinge of epicness. Besides, Marius sure writes some dynamic and catchy chorus. Tell me you don't want to sing along "For our king and for our land we will die with sword in hand", you probably need a hearing check. Solos in songs like 'Journey To The North' and 'Battle For Eloroth' are impressive as well.

I did say this was the part three of the trilogy, did I? In this album our heroes set out to collect the "seven Ancient Artefacts",as song title would suggest, to defeat the Dark Lord, returning peace to "the Valley of Doom". So here you get the typical storyline for this kind of concept album, slightly LotR influenced. But the way Marius structured the whole thing made it far more enjoyable. Take 'The Sarlinian Bow' for example. Musically speaking it's not the strongest, but the operatic cooperation between the vocals is by far the best on the album. You have to hear the Warrior King announcing himself "feared and loved by many" only to be refused by the Tree of Life because "Your heart is cold, your soul is too" and Lariana granted the Bow instead for stopping the Warrior King cutting the tree down to really feel the drama. Also, yes, you're hearing the chorus of The Battle of Bargor-Zun in the grand finale of 'For Our King And For Our Land'. Sort of invokes memories and makes one emotional.

In fact, Marius's choice of words and the way he conveys the mood has improved considerably. Be it the chilling and melancholic "arriving at his island, we're met with a gruesome sight" ('The Ballad Of Arnoth The Wild'), or the proud and glorious "United for this final battle, dwarves and elves and men" ('For Our King And For Our Land'), I can always feel my mood shifting as certain phrases caught my ears.

But most of my credits for this album definitely went to the vocals. Marius do have the knack of inviting some of my favorite vocalists in the genre to the party and forming arrangements that blend their voices into an organic whole, yet also enhance some of their individuality. Elisa Martin really took me back to her Dark Moor days with powerfully delivered vocals on 'Journey To The North'. Herbie Langhans's slightly nasally and rough voice builds up the tension perfectly in 'Deep In The Mountain'. And Daniel Heiman. Daniel's high notes have impressed me since Lost Horizon and his work in 'Stars Will Light The Way' is still as phenomenal as ever. I do feel surprised with Ralph Scheepers here. Since his voice is more Rob Halford influenced, I hadn't expected him to harmonize so well with this sort of cheesy EUPM sound.

Anyways, if you're a power metal fan that has been enjoying the genre since the 90s and dig the sound of Rhapsody, early "Theater Of Salvation" era Edguy, Freedom Call and all those old school masters, this is definitely a remarkable album you wouldn't afford to miss.

Highlights: 'Journey To The North', 'The Sarlinian Bow', 'Deep In The Mountain', 'Stars Will Light The Way', 'For Our King And For Our Land'

Many years after Tobias Sammet blessed this land with Avantasia and the “Metal Operas 1 & 2” an army of ambitious youngsters decided to start dishing out metal operas, trying to capture that epic feeling of grandeur that a well-thought fantasy concept album can provide. The result is often flat and full of cheese, but Marius Danielsen has had two more attempts with his previous parts of his ambitious epic trilogy and in theory, enough time to smooth out all those problems the first 2 parts suffered from.

Well, Legend Of Valley Doom Part 3 boasts a noticeably better production value and it is a natural evolution of the first two attempts, so if you enjoyed those, by all means give this one a spin. We have the typical power metal formula of the late 90s, with the big choruses and doublebass, shredding solos and some great high pitched moments, courtesy of the breathtaking line-up of guests that Marius managed to secure (hats off for this alone). The first single released was 'The Stars Will Light The Way' which while a “by-the-numbers” song, is impressive, extremely well executed and ultimately addictive and FUN, so I was looking forward to the full album.

Unfortunately, the above single was the best song in here, by a long mile. There are some great ideas, don’t get me wrong, but they are either underutilized or stretched to tedious lengths that ultimately feel forced and awkward. Take 'The Sarlinian Bow' for example, which boasts the most weird-ass dragged out chorus in the history of power metal. Seriously, the chorus alone must be almost 2 minutes, which obviously beats the purpose of it being a chorus. Most of the other songs are hit or miss, there are some fantastic narrations by the legendary John Rhys-Davies that help with the world-building and it is always a pleasure listening to Matthias Blad’s heavenly voice, but the cons unfortunately far outweigh the pros here.

There are obviously a lot of “hey that sounds familiar” moments on the album and the band never really colours outside the lines, and honestly this would not be a dealbreaker but there was a maddening decision that left a sour taste on the climax. For some weird reason Danielsen decided to end the album with a grand epic that is a note-for-note rehash of Luca Turilli’s “Legend Of Steel” (using Olaf Hayer to add insult to injury).

The story…is “meh” to put it mildly. It’s a mix of Lord of the Rings with the most generic quest ever planned around a D&D table and that would work on paper, but it’s swarming with subpar English and cheap way-outs in its stanzas that ultimately hinder the effort instead of adding to the experience. I can understand this blatant simplicity may have some sort of appeal to younger audiences, or people not familiar with a single S&S book, but I expect and demand more when it comes to grand epic tales.

The verdict: A+ for effort as I imagine the budget being just a fragment compared to his main inspirations, but I feel some parts of this are not working. The really good songs of this whole trilogy are so spaced out, that they feel like the exception rather than the rule. Marius Danielsen should have taken the time to go back to the drawing board and to cut two thirds of his trilogy as it fails to keep you hooked on the story and the character progression. Had he done that, he could have kept all the fantastic songs that he is clearly able to write and release ONE amazing album for old-school power metal fans.

Check: 'The Stars Will Light The Way'