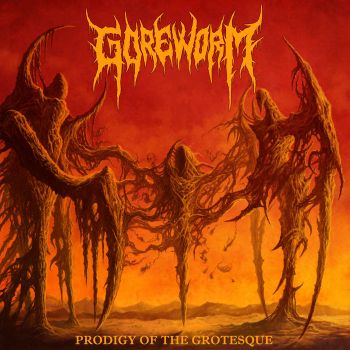 With a name like Goreworm, it's probably easy to expect some low-grade brutal death metal band with indecipherable gurgles and slams galore (which I would welcome with open arms.) So, forgive me for not giving Goreworm a proper chance for a while, but, I'm not sure I forgive myself. I was missing out on some pretty awesome technical death metal that features elements from both brutal death metal and melodic death metal. This is sick, twisted tech death with a lot of character that makes it shine out from a lot of the bands of their ilk.

Goreworm's debut, Prodigy Of The Grotesque can best be described as a wretched birth child of Archspire and The Black Dahlia Murder. For starters, this record is on Tesla's ludicrous mode at all times. It's always firing at all cylinders, with speed that could melt a human's spine if administered too loudly. The drumming is impeccable, and I was surprised to find that it isn't a high profile drummer that's in a ton of bands. Kit master Sean Bruce shares only this band and another, but someone better get this guy on more radars because his stick work is remarkable.

Guitars and bass are highly technical yet also very melodic. This truly sounds like if Archspire started playing The Black Dahlia Murder riffs and leads, with that Gothenburg sense of melodicism mixed with incredible technical skill. The bass has a lot of time to shine, despite its mediocre sound in the mix. There's a ton of sick bass leads all over this album. The riffing is pretty good, but the melodies steal the show for the guitars. There's some occasional slam riffs in some songs that bring everything together to make the tracks more dynamic.

The vocals are death metal vocals, in case you couldn't have guessed already. The lows are fairly standard, the highs sound so much like Trevor Strand it's incredible. I even had to do a double take to make sure he wasn't a guest feature on some songs because damn, this guy sounds like him a lot on his high screams. He also does some sick slam vocals in some tracks that really add more to this album vocally.

Prodigy Of The Grotesque may signify the next Canadian prodigies, alongside already established names such as Archspire, First Fragment and Beyond Creation. This band is merely a few tweaks and fixes away from being the next big thing technical death metal has to offer. This album is certainly a grower, as the music is so intense and there is so much to unpack that it can take a while before it truly settles. Grotesque, vicious and blisteringly fast.

Favorite song: 'Taste Of The Deceased'