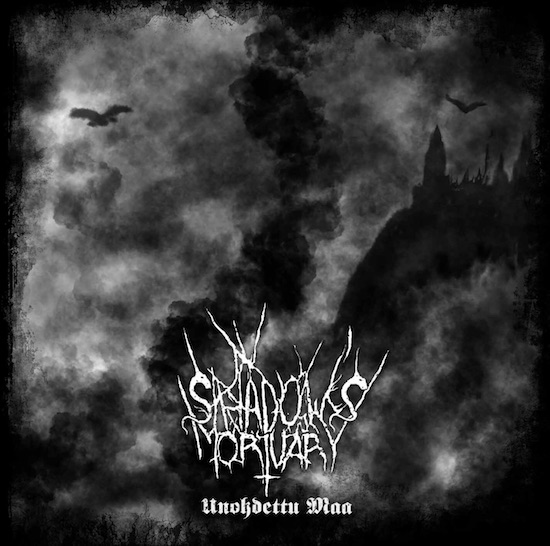 Some guys wonder about the big number of Finnish black metal bands. I don’t. For the explanation is simple. Finland is, as we all know, the land of the thousand lakes. And what do well-behaved lakes do in winter? Correct, they freeze over. Now winter in Finland lasts approximately from the end of August to the end of May. In addition, this country has almost more lakes (188.000) than inhabitants… as said, almost. Anyway, this means that more or less every inhabitant constantly passes by a frozen lake. In view of this, the idea of icy guitar leads is close at all times. The result is the world’s most vital black metal scene and that's only logical.

Shadow's Mortuary are a part of this scene. Well, assuming that each of these communities has leaders and followers, the band belongs to the latter. There are no individual elements in its sound. Unohdettu Maa presents the pretty usual mix of raw, throaty vocals, rumbling, cold guitars and pounding drums between mid-tempo and high velocity. Aggressive sections are mixed with parts which show one iota of melody. Finally, the devil sits on the shoulders of the musicians and so a diabolical aura is omnipresent, even though the band does not focus very much on atmosphere. There is rather a small rocking, punk-like attitude that shimmers through the songs every now and then. However, the malicious nagging of the lead vocalist clarifies that this is generic black metal.

Apart from the missing individuality, it is the quality of the compositions that makes Shadow's Mortuary to followers. No, I do not speak about a weak work. For instance, the rolling guitar line at the beginning of 'Teloituksen Aika' opens the gate to a pretty intensive, evil and cruel piece of completely non-polished black metal. Its fast parts deliver a proper feeling of insanity and so I am listening to a great number from the beginning to the end. But Finland has given the world so many glorious black metal songs that a couple of good tracks is not enough to be ahead of the pack. This is especially true in the light of pieces like 'Viimeinen Laukaus'. It's okay, yes, yes... it is. But sometimes "okay" is just another word for shit – so let's not kid ourselves, compared to the highlights of bands like Behexen, Malum or Aegrus, this bland composition ripples along like a small stream in the spring sun. But well, as noted above, they don't know a season called spring in Finland. Perhaps this must be taken into account to reduce guilt.

The angry 'Ylistis' is carved from other wood. It makes us forget the few number of lukewarm compositions of the album. Moreover, together with the vehement closer, it builds a furious and ferocious ending. Unohdettu Maa with its cloudy artwork is not bad and it would have profited from a better defined production. Here reigns Mr. Rumble! Nevertheless, black metal maniacs can check this album without having to fear much. I just have three wishes for the next album from Shadow's Mortuary: more expressive riffs (the one of the opener shows that they can create them), the realization that slow pieces without a spooky mood make little sense and the courage to integrate one or two individual elements. This cannot be too much to ask. After all, winter starts again in Finland in two months.