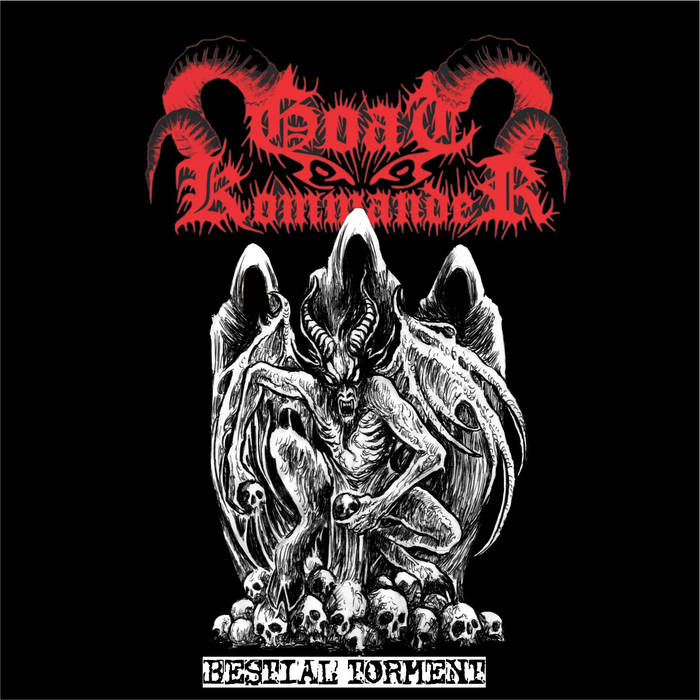 Sometimes already the title of an album speaks volumes and combined with the name of the band, everything is clear for everybody who has at least a faint of idea of metal. Bestial Torment, released by Goat Kommander, is among these titles and it does not promise too much. The lone wolf who runs this "band" is a multi-instrumentalist with a hundred current and a thousand former projects. It looks like this guy has no other hobbies than extreme metal. Holy narrow-mindedness! Anyway, Bestial Torment wears its name with pride and houses a very robust dose of brutality at the interface of black and death metal. As a patriotic traditionalist, the artist did not forget to integrate a cover version of Sarcofago, but this piece does only score with its demonic atmosphere. Music-wise it suffers from a lack of energy. To be inspired by Hellhammer is one thing, to execute this kind of songs in an equally glorious manner is another one.

More thrilling are songs like the opener. The people-friendly titled 'Christians To The Poisonous Snakes' is an orgy that connects brusque guitar lines and vocals from the mausoleum with a massive, bulldozering production. Don't ask for sunshine! Despite its high-tempo approach, it is not the most dynamic song in the history of extreme metal, because it reveals a slightly monotonous approach. Nevertheless, it's a great opener. It shows that the Kommander is not interesting in making compromises, and the remaining material confirms this statement. Many sequences appear like the setting of a barbaric bloodlust and some of them have the charm of Venom's debut, but with the much more fire, hate and cruelty. And there is one big difference to the early albums of the pioneers. Goat Kommander does not have the smallest iota of self-mockery.

At the end of the day, it doesn't matter. Songs like the sinister 'World On Fire' illustrate impressively that music and the apocalypse have more in common than most of us thought. I don't say that this is an exclusively violent album, because a few parts offer tragic, nearly melancholic sounds. But the spirit of the protagonist and his art is clear. Given this fact, Goat Kommander convey authentic vibes of extreme metal without even batting an eyelid. Already this EP is recommandable, maybe the first full-length will show the complete potential of the mastermind. I'm curious.