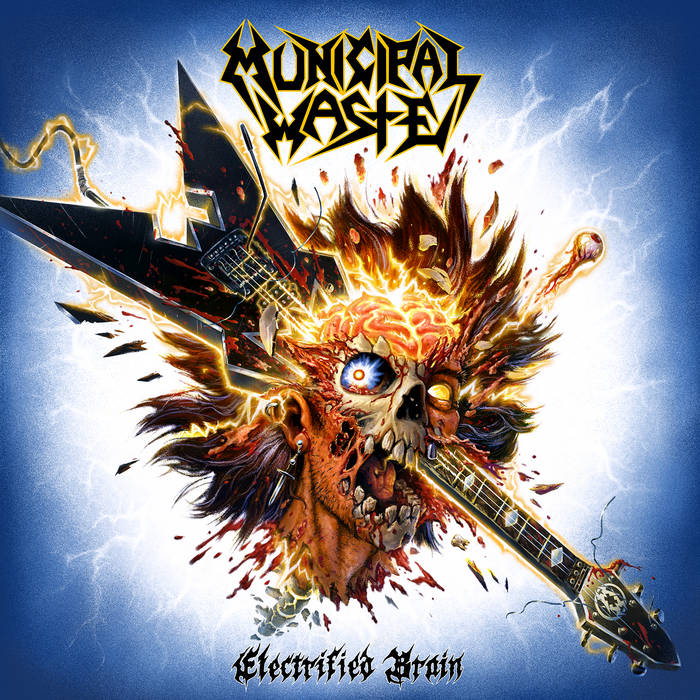 Municipal Waste’s seventh full length comes with a closer approach to traditional heavy metal than the rest of their catalog. The upbeat punky feel -trademark of the band’s sound- is still present but the riffing is a little bit more heavy and pounding than on their previous records, which are basically pure crossover thrash and way more minimalistic… on the verge of punk. Songs are still short but some of them develop more ideas than the others, specially the ones that render a tribute to 80’s heavy and speed metal, with more variation and mid-tempo banging action. What you can take for granted is that intensity and energy is blowing the roof off, the band sounds as inspired and convincing as in their prime. For a band that has been for so long in the business, risking so much on that change of sound is admirable and I think it has been executed almost perfectly.

Guitar’s tone is super thick but sharp at the same time, a wet dream for fans of the genre. The riffing and its nostalgic 80’s touch is what makes this album so special, that NWOBHM influence. Melodic twin guitar leads but reeking of speed metal on the other side with fast palm mute sections and chromatic chord sequences. The soloing section is another staple of this record, scratching the edge of genius; it is their second album featuring Nick Poulos on the lead guitars and it shows the evolution the band has had with his inclusion. While he isn’t Yngwie Maslmteen he manages to capture the essence of the classic guitar heroes precisely and neatly.

The vocals are mean, Tony Foresta’s spitting onslaught is one of a kind, so youthful and nonconformist as always. Lyrics might not be profound or philosophical but they are kind of fun, speaking about zombies, sci-fi and nuclear catastrophe. Percussion is as tight as always but the double bass drum is more accelerated, drum fills are super rich and the punch is just incredible. Bass lines are way more prominent than on their previous records too, they drift from the main riffs to draw some interesting figures throughout the whole album.

Overall, I’d say this is one of Municipal Waste’s best albums; that youthful pumping accompanied by more mature riffing is way more than I expected from this band at this stage of their career but at the same time it was what they needed to do in order to refresh their sound and add a slightly different touch to what they have being doing since 2003.