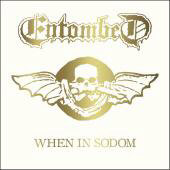 It makes me break out into a huge smile, when I am charged with reviewing a classic band, or given a classic album. When I have to do both in one... makes me feel as if I was in bed with a supermodel who owns her own brewery and allows me unlimited drinks. And now, boys and girls of metal - I am reviewing Death Metal royalty... Entombed.

You cannot express what it is that makes Entombed so damned good of a band, when it has been written and said so many times before. It is a testament to how good a band is, when they release a EP of only five songs like this, and have it still kick major ass. These Swedish metallers have done that with the EP called "When In Sodom" which was a perfect precursor for their "Serpent Saints - The Ten Amendments" release a year later.

Strong riffs and horrific lyrics are exactly what every song on this album are, Entombeddo not disappoint often. It is like the nastiest horror movie put to a metallic soundtrack, and the adding in a whole shit load of attitude to glue it all togther into one monster that is unstoppable. I love every song here, but I have to say that if I did have to pick one that stood out the most - the title song is my favorite simply because it is nasty as hell... but you need to hear it again and again.

As fucking cliche as it sounds: if you don’t own this album already, go and buy it. This album is the reason I live and breath and eat metal, because it shows the sheer ferocity and unmistakable power that it holds in its gauntleted hand. This EP needed to be a album... my only complaint.