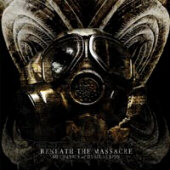 Before "Mechanic of Dysfunction" ever came into my hands, I practically didn't know anything about Beneath the Massacre. A couple of reviews that I've read talked mostly about their previous album "Evidence of Inequity", and MP3's that you could listen to were not enough to come up with some kind of an opinion about this band. Well, what I'm trying to say is that, without any warning and with no mercy, I was slammed against the floor...

If I had to describe my first impression in one sentence, I'd probably say something like: completely destructive typhoon of technical extravagance, absurd perfection that is at the same time uniquely chaotic. After an introduction like this, I couldn't stop myself from further exploring this album, again and again, of course. The problem is that after every time that I listened to it, something was missing. Then it finally hit me - there was not a single solo on this album! Stuff like this should just not happen, not to a band like this. Then I noticed that the bass line was almost inaudible, as if the band concentrated on the speed and intensity of music, forgetting about the overall effect. Drumming is unbelievably fast, very precise, sometimes maybe even too precise - almost as if it was a program, that goes on and on, like a robot, fast, steady, even, but not very exciting. Also, even though I am a huge fan of growling, in this case, the vocals disappointed me. In every song, they are the same, predictable, and after a while, they become monotonous and boring. The guitar sound and technicality you can almost compare to Necrophagist - music is aggressive and brutal, underlined with techno-progressive and black-metal accents.

Although these guys are very, very tight somehow they missed the fact that speed is not everything. The songs on this album blend into one another - there really isn't much to differ one piece from the next one - no memorable riffs, no solos, no crushing breakdowns, it's very uniform throughout, almost seamless.

To sum it up - if you're looking for fast and furious - this is something worth your while. If you're looking for brutal and aggressive you will also find it here. As for me, I'll wait for their next release, because somehow I know they will make it 100 times better.