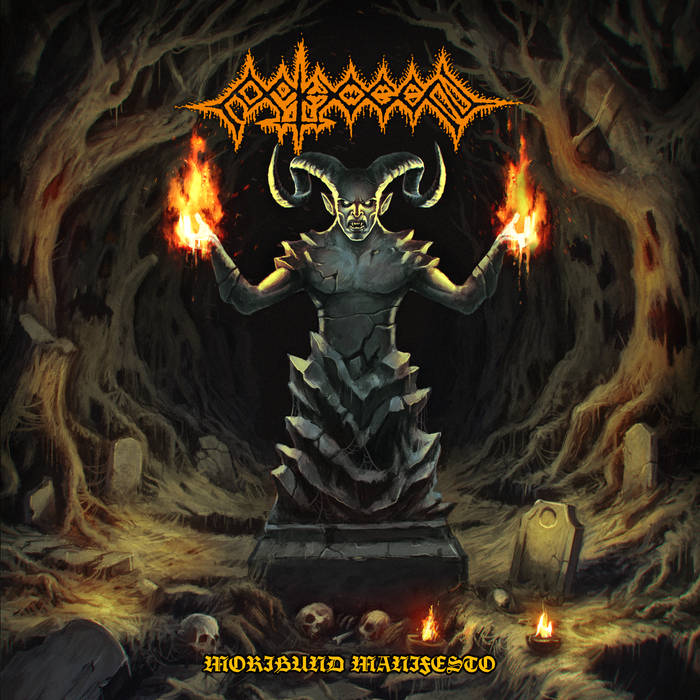 While the whole old school death metal revival trend seems to be cooling down after a while, that doesn’t mean there aren’t any death metal bands worth checking out, especially when, aside from all the new and young acts, many veterans from the underground are also starting to reemerge and make their stand or are finally getting their dues. And today we have Filipino death metal veterans Pathogen with their sixth full length, Moribund Manifesto, courtesy of Old Temple.

As it seems to be the norm with many international acts, while Pathogen are one of those bands that have been grinding and hustling for a while, this is the first I hear of them, and it's all the more unfortunate since, like I mentioned, this is their sixth album. But with that being said, this particular album on its own is a very interesting place to start learning about them. Based on this record alone, Pathogen play old school death metal in every sense of the word, and all the trademarks are present. Downtuned chugging guitars, deep growls with occasional high pitched shrills and the use of blast beats and double bass which also focus on sheer speed and brutality. But will all that said, and accepting those elements as emblematic of death metal, this record is still a really solid work, primarily because while the band are certainly a flavor of old school death metal, their style and sound has less in common with Cannibal Corpse or Deicide, and more in common with mid to late 80’s super early death metal which is also inspired by both Swedish and Brazilian early death metal, with tinges of early Death and Possessed.

The album opens with the slow burn opener 'Lament Of The Graveless', which is also the longest track of the album at over seven minutes, and the band from the get-go show not only their skill and knowledge to make ripping old school death metal, but also their mastery of blending technical playing with sincere primitiveness. The opening track really displays that by switching between bursts of brutality and mid paced dirges with a heavy emphasis on riffs and double bass drums. And following from that initial track, the rest of the album is just relentless. Tracks 2 through 4 have an almost punkish feel with how savage they are, the guitars, drums and vocals being the major standouts. My only major complaint other than the single mindedness of the record is again, the buried bass, which is also not helped by the murky production quality, but I digress. Where the band do compensate for those issues is with their aforementioned mastery of speed and intensity, the shorter tracks are obviously the major bangers with as I stated above, a punkish quality, but the longer deep cuts are the surprising best tracks. The band’s slower sections have a hard rock groove that works surprisingly well, and makes the record more dynamic while also keeping the murky and primitive essence.

To close off, not only is the band’s playing and writing good, but what makes the record enjoyable is the production. The sound is appropriately murky and heavy, which completes the band’s overall old school vibe, but it also makes the album sound warm in a way. The best way to explain would be to hear Brazilian death metal records from the late 80’s, and Pathogen have that same quality, but without outright copying the Brazilian sound. The only real issue is how this is a death metal record for death metal fans, which is fine, but for someone who’s never heard death metal, this would be a rude awakening.

Overall, Pathogen really surprised me, and this record also incentivized me to check their back catalog which is always a good thing when discovering new bands.

Best tracks: 'Lament Of The Graveless', 'Deviated Flesh', 'Spectre Of Thantos', 'To The Dismal Depths'