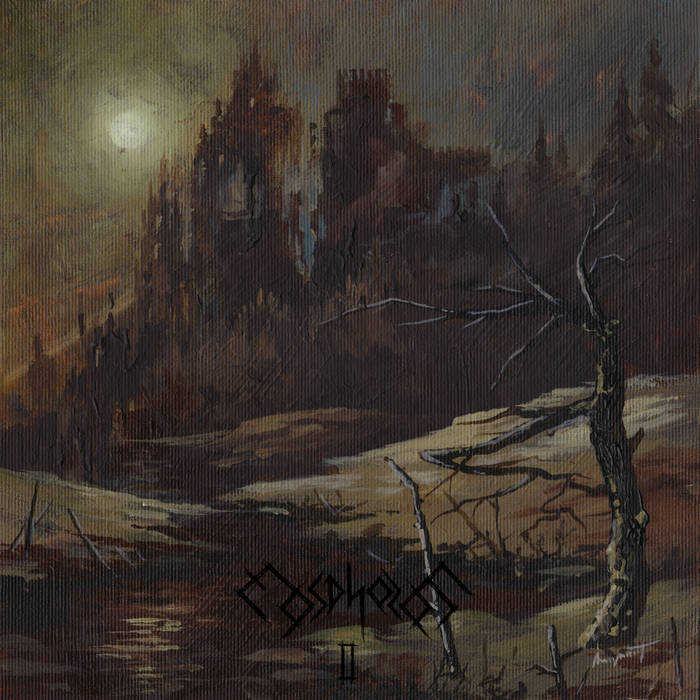 Back in 2016 a Cascadian entity by the name Eosphoros was formed by members from other Oregon acts like Shroud Of The Heretic and Triumvir Foul, and while those are excellent death metal bands, Eosphoros was pure black metal. That fact was made abundantly clear by the band’s debut self-titled record, which displayed a style of black metal that was a perfect blend of vicious darkness and forlorn atmosphere. In 2022, Eosphoros returns with their sophomore record, simply titled II, and released through Altare Productions.

People familiar with Eosphoros will probably be very surprised by this new opus, mainly because of the sound. The production is still very raw, however, while the debut also had a raw production, the way that album sounded and the overall feel was more haunting and deep, almost as if the band wanted to evoke the feeling of being lost in the woods. For this new record, the production and feel is much more aggressive and piercing, and that also applies to the music, the record is faster and much more thrashing, while at the same time, the music is much more melodic and dynamic. The latter aspect is most noted in the drumming department courtesy of session musician, the unparalleled Andrew Lee. Unsurprisingly the drumming is one of the major highlights, as it gives the music an extra sense of groove and rhythm, but that’s not to say the drumming is the only standout of the album, core member JG and AD are not only as good as they were in their debut, its their skills as both songwriters and performers that give the music that new and refreshing edge that is completed by Andrew Lee’s outstanding drumming. All in all, while a sharp change of pace from the more atmospheric debut, it is a flawlessly executed and refreshing new direction for this band to take.

From the start of the appropriately titled opening track ‘Tempest’ you get pure, unrelenting and triumphant black metal, that live up to the band’s description of “feral Oregon black metal”, which can also be heard in tracks like ‘To Return’ and ‘Gallows Harvest’, and that intense momentum is carried through the entirety of the record. However, while this album is indeed a change of direction from their debut, the band haven’t discarded or downplayed their atmospheric tendencies, as tracks like ‘Mycelium’, ‘Destroyer Of The Storm Sun’ and the grandiose closing track ‘The Hunter’ is where the band display their atmospheric side, albeit in the form of more dirge like passages as the bridge or a more mid pace track in its entirety, while the aforementioned closing track, at over 13 minutes closes the album with an extended atmospheric and folky section that’s carried entirely by guitar melodies, subtle bass lines and a closing subdued yet lush synth. That atmosphere is still in line with the band’s previous work, but again, refined, tempered and filtered through the more ferocious melodicism with tinges of folk and thrash inspired riffs and hooks.

The final aspect to highlight are of course the performances of JG and AD since I already highlighted AL. JG’s vocals are consistent with the previous record, but it is impressive how his signature howling shrieks perfectly fit within this new style. Where he truly shines however is once again through his guitar playing. JG’s riffs carry each song and the guitar tone is not only distinct, but balances harshness and thickness in a way that only the gritty production makes this tone and playing pop, and of course, when he slows down and focuses on melody and atmosphere. AD is also still very good and the sonic foil JG’s wailing guitars, that being said, my one only complaint is that in some areas the bass isn’t very audible in some sections of the songs, this is really a personal nitpick, since the areas where the bass is audible are excellent, but still, it is worth noting.

Overall, this is another triumph for Eosphoros. It maintains all the bands unique elements from their debut, but with an excellent change of direction that’s also consistent with the ethos of black metal, simultaneously old school yet refreshing and forward thinking. Eosphoros have truly proven themselves to be not just a worthy USBM band, but a truly outstanding band in their own right.