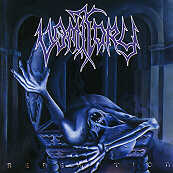 Vomitory are dead and their bones rot on the colossal cemetery of death metal. I still mourn for them, especially with regard to the more or less disappointing debut of Cut Up, the band that gave two members of Vomitory a new home. Anyway, their discography houses some jewels and in a retrospective view, one realizes that Redemption marked the beginning of the best era of the Swedish destroyers. It's a phenomenal work with two fantastic successors.

The playtime of roughly 33 minutes gives a first indication and the songs themselves confirm that the punchy album does not have a single gram of fat. Without any detours, the musicians fire eight cluster bombs into the crowd. The songs come directly to the point and the sound technicians have done a good job during the recording session. Voluminous, pretty low-tuned guitars dominate the appearance of the songs. Vomitory do not strive for new records in terms of brutality, deep sounds or velocity; nevertheless, their bone-breaking way of proceeding knows no mercy. The band is also not interested in countless technical gimmicks, but the guys have written furious, smashing pieces that are enriched with a slightly morbid touch from time to time. Moreover, the guys have a talent to combine their heavyweight approach with an almost irresistible flow. The songs are always comprehensible - and the excellent guitar parts are anything else but a matter of course with regard to the fact that the drummer and the bass player have written the music.

Maybe the dudes were inspired by the nearly smooth configuration of "Ashes of Mourning Life", a cover version of Macabre. The song fits perfectly the remaining content of the album. It is kicked off by some explosive tones before an infectious riff drives the swift verses. Once again, the guys do not offer ultra-speed, but their level of heaviness, aggression and velocity is beyond all doubt. And the fact that the band does not try to impress the listener with an overdose of technical skills does not mean that the songs are boring or predictable. Vomitory have added the necessary amount of ideas, variety and passion in order to release a strong output. All songs can rely on a very solid compositional fundament and they convey a fatal touch. Needless to say, that non-typical death metal elements do not show up (as long as blast beats can be categorized as a more or less usual stylistic device of the lethal genre.) Instead, Vomitory handle the proven means in a very clever way. Surely, the deep vocals are monotonous, but they fulfil their function brilliantly.

Redemption works as a whole. Pieces such as "Forever in Gloom" or the title track do not hesitate to show the pure force of the sub-genre, but this is not to say that any kind of letdown affects the overall impression. Each and every song is an unstoppable steamroller and therefore it is difficult to find points of criticism. Okay, the production is a little bit blurred, but nevertheless great. Moreover, some might say that one or two songs fail to develop an easily recognizable identity. But I don't care about these trivialities. Redemption is an energetic, vibrant and majestic yet violent work which separates the men from the boys.