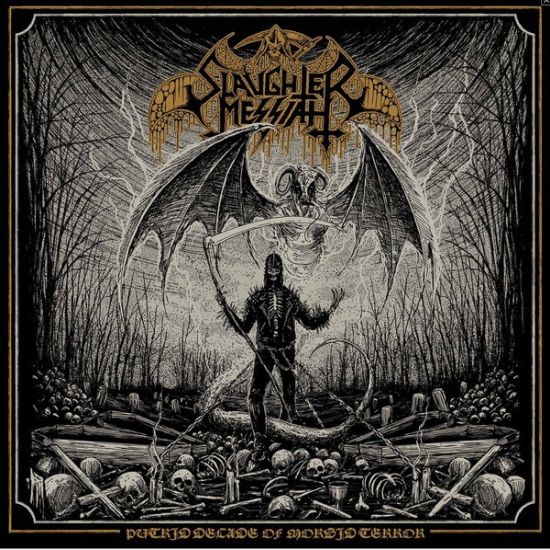 In my opinion (which, honestly, doesn't account for all that much) Slaughter Messiah are currently the best band Belgium has to offer. Their combination of black -, thrash - and death metal just ticks all the right boxes with me, and is of a far more genuine brand than some other bands playing in the same ballpark. I already owned their previous EP's, but still I was more than happy to see this compilation coming, because of the inclusion of two rare demo's included. I was not disappointed.

As stated above, Slaughter Messiah combine primitive styles of black/thrash and death metal. Imagine a beefed-up version of old German noisemongers such as early Protector, Deathrow and Kreator, with blastbeats and harsh black metal shrieks added, and there are even a few moments that made me think of Repulsion, Hellhammer, Messiah and early Cryptic Slaughter as well. Besides the reverence for the gods of old, there is also the influence of Mayhem's "De Mysteriis..." album present, especially noticeable in the guitar work at times, but I was reminded of early Dark Funeral and the first couple of Enthroned albums too. Not remotely surprising, of course, that Lord Sabathan's former band would shine through in the music of Slaughter Messiah. His characteristic rasp was a major part of Enthroned, and is sorely missed nowadays. A special mention should go out to the track 'N.W.O.B.H.M. (New Wave Of Belgian Heavy Metal)', where the riffing recalls old UK heavy metal commando units like Jaguar, Avenger and (who else but) Venom, filtered through a black/thrash metal lens, which sounds totally awesome.

The songs themselves are pretty varied compositions, brimming with a malevolent atmosphere of occult hatred that seems to be forgotten in a lot of contemporary black(ish) metal. These songs rip, tear and pound in the best underground tradition, utilizing thrashing polka beat rage alternating with blast beat-driven mayhem, while colliding with the furious riffing and leads, but the band just as easily build in slower, heavier parts to keep proceedings varied. Perhaps playing isn't always super-tight, but this adds to the old school atmosphere the music exudes, while all is kept aggressive throughout.

Because this is a compilation of different recordings and releases, the overall sound tends to shift somewhat between the songs, but isn't really noticeable until the last four tracks. These make up the first demo, and sound more primitive and crude, like the band was still toeing the water, but the ingredients that make up the Slaughter Messiah sound are already there. The Terrorizer cover is pretty unexpected, but doesn't feel out of place and actually fits in great, given the hectic black/thrash approach.

This is a great compilation, giving an excellent overview of the band's progress up to their full length (which is also very much worth your time). Some tracks are present twice in differing versions, and 72 minutes is a heavy load to take all at once perhaps, but digested in chunks this is still a banging release that I can recommend to all fans of old school tinged musical extremism.