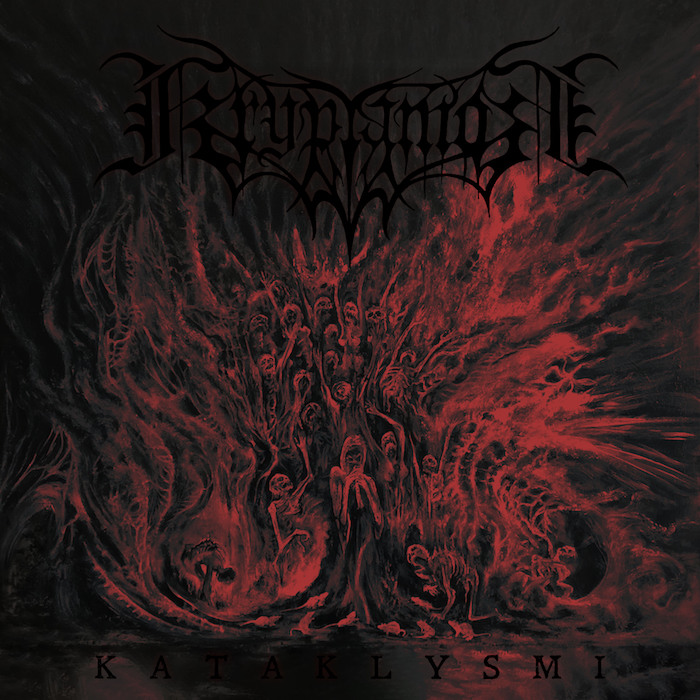 Kryptamok's debut was a great black metal album, a typical monument from Finland. Maybe I was too euphoric about it at the beginning, nevertheless, a very strong work. Now the band returns and the promo promises "a unique twist" and "a different direction". And to my surprise, this is a promo that does not only tell lies. Unfortunately, the change is pretty problematic.

On the one hand, we still get the "normal" yet absolutely exciting approach. The state of the art production (less noisy and better defined than that of the debut) spreads a proper coldness, the grim vocals leave no doubt that bitterness and scorn have a firm place in the heart of the singer and the guitars are able to create fascinating lines that convey the triumph of darkness in a very good way. Especially the outstanding title track must be mentioned in this context. It is aligned with the songs of the debut and combines intensity with the local brutality Suomi is well known for. Finally, it does not lack depth and substance. On the other hand, songs like 'Outo Kuningas' show up and deliver almost finntrollish humppa elements. Okay, the strange keyboard melody is quickly blown away by harsh guitars. Nevertheless, some weird sounds return during the instrumental part. Master's Hammer send greetings. Honestly speaking, this broadening of the musical horizon appears dangerous to me. Not for the moment. Even the symphonic 'Helvetin Esistaistelija' cannot be accused of mediocrity. It's a solid track that sound like a leftover of early Gehenna. Only its overlong intro hurts the flow of the album. However, I fear if the band goes on in this "different direction" it will lose its teeth.

Let's get from the future back to the present. Track no. 7 (forgive me, but these Finnish titles are pretty complicated) offers a violent breeze of blackness and that's no isolated case. The powerful, non-symphonic parts still dominate and make it easy to enjoy the album. Kryptamok can compete with the better known names from their homeland, for example Horna or Behexen, because they have a clear vision of their sound and they are able to implement it coherently – in particular when it comes to the more aggressive, high-speed facet of their art. In addition, the atmosphere is not neglected. That's good, because black metal without atmosphere is no black metal at all.

All in all, Kryptamok does not derail with the small experiments they have dared. Instead, they confirm the potential their first album indicated. Of course, old men like me always find something to complain about, but do not take it too seriously. Kataklysmi spreads the blazing flame of black metal and reflects the fascination of the subgenre, not in every second, but at least quite superior.