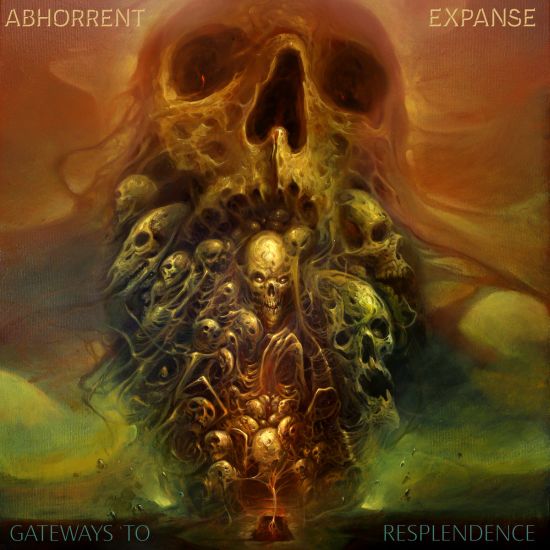 It’s not often a dedicated seeker of extreme sounds comes across new music that truly sounds different from anything else currently being released, but the debut album by US quartet Abhorrent Expanse is one such example. A glance at the artwork suggests that our expectations will be met by a slew of relatively conventional death metal, but it takes mere seconds of the noisy drone that greets us at the outset of the first track to disabuse the listener of this naïve notion. This is because Abhorrent Expanse are that rarest of beasts, a truly improvisational extreme metal band, and Gateways To Resplendence captures the frankly terrifying output of a group of astonishingly competent musicians, as adept at building screeds of ambient noise and drone as they are at churning out roiling, dissonant death metal riffs. Somewhere between Ephel Duath, Krallice, and Gnaw Their Tongues, Gateways To Resplendence is what Imperial Triumphant have been heading towards for a couple of albums now, but have lacked the courage to truly throw themselves into, always pulling back into something comparatively accessible at the point at which they threaten to lose the shackles altogether. That is not intended to be a criticism of the superb New York jazz-metallers, but more an indication of just how out-there Abhorrent Expanse are, heading into far-flung solar systems, while their peers are comfortable within the confines of the Milky Way.

Despite the fact that each song is basically an avant-garde noise jam, it is not without structure entirely, and the way in which memorable sections of music occasionally emerge from the cacophony as they do periodically on second track ‘Annihilation Operators’ makes the album thrillingly unpredictable, but immensely listenable despite the maelstrom of coruscating sounds. Inevitably, some tracks lapse a little into Captain Beefheart-style tomfoolery, and your own experience of the album is likely to be defined by your tolerance for atonal and arhythmic noodling, but almost by definition, it is impossible for an album such as this to captivate at all times. The nature of improvisation means that the output will inevitably be somewhat inconsistent, but Abhorrent Expanse miraculously manage to send their arrows into the bullseye much more frequently than they send them flying harmlessly beyond the target. In fact, the vast majority of the album is bizarrely addictive, despite the lack of repetition and almost total absence of conventional melody, and that is quite the achievement. It is possible to imagine the band appealing to fans of Sunn O))), or Earth, even if they don’t slow down to quite the stultifying tempo of those bands, for they capture the same spirit of sonic adventure, even if the payload is delivered in a way that relies less on brute force and volume, save the lengthy and apocalyptic closer, the splendidly titled ‘Arcturian Nano Diamonds From The Tranquil Abyss’. Abhorrent Expanse tend to favour skittering snare hits, and broken arpeggios over screaming feedback, at least when not locked into punishing death metal, but they achieve the same level of psychedelic immersion as those drone masters, as well as considerably more tonal and textural variation. Gateways To Resplendence will not be for everyone, but those that they do connect with will likely find the connection unbreakable and endlessly rewarding.