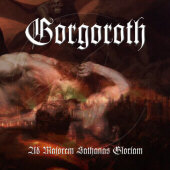 My very ambivalent relation with Gorgoroth did not stop me from trying to find an album that could at least partly challenge their early works. And well, here it is. Ad Majorem Sathanas Gloriam does not bring back the fundamental approach of Pentagram or Antichrist, but it’s an album which reflects firmness and vigor, at least to a certain degree. The production is much better than, for instance, that of Incipit Satan. I know, this doesn’t tell us very much with regard to the toilet sound of their sonic fart from the year 2000. So, I like to add that the here presented work does not suffer from major deficiencies in terms of the technical implementation. It fails to fascinate with an extra portion of vehemence, intensity or pressure, but everything sounds okay and the producers have found an acceptable balance between underground dirt and professional transparency. Some of the faster parts appear somewhat blurred, but that’s no big deal.

Well, I am able to forgive even a much worse production as long as the song material convinces. Expressed differently, the solid production does not say much about the overall quality of the disc with its gargantuan playtime of nearly 32 minutes. (Don’t worry, Gaahl, we have got used to this slightly embarrassing configuration.) The supreme discipline is still the songwriting. Ad Majorem Sathanas Gloriam offers a mix of relatively nutritious tracks ('Carving a Giant') and songs of the category I-have-no-clue-why-they-recorded-it-but-it-does-not-suck ('White Seed'). Gorgoroth present a solid basic heaviness, many high velocity parts kill a few limp sequences and the usual aesthetics of original (non-ambient, non-symphonic, non-suicidal, non-whatever) black metal dominate the material. The closer, for example, delivers both untamed high speed and Immortal-like, mid-paced riff driven parts. 'Prosperity and Beauty' eclipses its seven sonic brothers, even though the opener 'Wound Upon Wound' also does its best to leave nothing but scorched earth. But only the closer provides the well-appreciated icy feelings Norwegian black metal once introduced into the global metal world.

All that glitters is not gold and all that screams is not black, but here Gaahl performs solidly. He focuses on rawness and therefore his voice is not prone to useless experiments. On the other hand, it’s an ordinary and not overly impressive performance. But as luck would have it, exactly the quality of the vocals is representative for the entire product. The album will never get a place in my private black metal hall of fame (a very virtual hall, to be honest), but it consists of orthodox, acceptable and sometimes even pretty strong songs. The band does not reach the highest level of misanthropic insanity, that’s right. Nevertheless, the generally resilient degree of grimness on the one hand and details like the atmospherically howling leads of 'Sign of an Open Eye' on the other hand form an output I can recommend for all those maniacs who also want to know the formations that never were able to release masterpieces like “Pure Holocaust”, “In the Nightside Eclipse” or “Frost”.

I am more than a casual fan of the Norwegian/Swedish black metal scene and I'm quite familiar with Gorgoroth from the early days. The new CD, Ad Majorem Sathanas Gloriam, is a lesson in evil straight out of the Scandinavian "black book". Originally spawned in 1992 from Norway, Gorgoroth has seen many lineup changes as well its fair share of legal troubles which should lend no credence to the music â€“ as that stands the music is pure "kult" black metal that is completely raw, unpolished (yet with decent production) and blasphemous â€“ all three elements of proper songs for Satan! The band currently consists of founder/guitarist Infernus (still holding helm since the band's inception), King ov Hell handling bass (though he has just left the band by mutual agreement for "ideological concerns), growling and vocal offerings are spewed from the throat of Gaahl. The drums were done by none other than Frost, who needs no introduction in black metal circles (though for those less versed, he is from Satyricon).

From beginning to end this offering is 31-minutes of blasphemy at its best! The CD has terrific moments of typical black metal insanity in tracks like 'Wound Open' and 'Carving a Giant', and total guitar-heavy slowness of 'God Seed' that do not diminish the reputation Gorgoroth has carved for itself in the last 14-years. 'Sign of an Open Eye' is simply brutal and horrifying. If true black metal is what you seek, then Gorgoroth will fill your wants nicely with Ad Majorem! Isn't it great to wait three years for a new CD from a great band and have it live up to all hopes and expectations? Gorgoroth has let up not one hair in its service to the Dark Lord and it shows!

As of this writing Gorgoroth has entered the Norwegian charts at 22 with Ad Majorem, while King has officially left the band by mutual agreement for "ideological concerns", hence carving another notch in the band's ever-changing roster. However, it makes me very happy to see a black metal band reaching any type of chart entry, especially in Norway where the shadow of Varg Vikernes, church fires and murders still loom ominously. Ihsahn did it earlier this year with "The Adversary" and now Gorgoroth has followed suit, exposing more people to the wonder and beauty that can be, and is, black metal! Give this CD a spot in the blackest part of your collection.