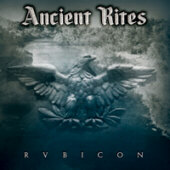 It was the year 49 before Christ. Julius Caesar and his mercenaries transcended the Rubicon. While doing this, they crossed the point of no return and the Roman civil war began. Germany had not been invented yet. From this follows that it was not easy to say who was responsible for the outbreak of this belligerent conflict. However, the military operation must have been an overwhelming scenery, an archaic action like Hannibal's crossing of the Alps in 218 B. C.

The word "archaic" does not really fit the music on Rubicon, because Ancient Rites perform pretty smooth songs which cannot be compared with their very early outbursts. Orchestral sequences are rather the norm than the exception. Yet it is also true that the album does not lack resilience and radiance. The guitars are not willing to give up the field to the keyboards and further "non-metallic" instruments. This leads to an inner strength of the material which prevents a bland or commercial appearance. The tracks boast with its maturity and sometimes nearly immaculate flow. Yet that's not all. Surely, one can lament that the material is too soft. But one can also recognize that the melodies on this album sound mostly great and never cheesy. Already the calm intro scores with an impressive melody line. Better still, its short tribute to the title track of "Fatherland", my favourite album of Ancient Rites, pleases me very much. "Templar", the first complete track, carries this melody forward, but now with metallic vehemence. Despite a (very good) short atmospheric, keyboard-dominated sequence, it is the stormiest song of the full-length and its pretty aggressive approach goes hand in hand with the lyrics which describe religiously motivated fights of the twelfth century.

By the way, the lyrical content is simply fantastic. Gunther Theys crosses nearly every European region and different periods of the last 2500 years. I like his descriptions which mostly avoid obvious statements. He is really an objective reporter, because he tells his stories with respect for its protagonists without losing the journalistic detachment. In alignment with his pan-European point of view, he uses different languages. The title track, for example, commences with a few German lines which are also prominently placed in the booklet and the proud closer "Brabantia" houses, of course, some Flemish or Dutch lines. Gunther does not do so for the first time, but it just fits his topics very well. "Ypres", whose lyrics deal naturally with the cruelty of the First World War, has a nearly philosophical touch. However, every text of the album makes clear that Gunther is fascinated by heroic deeds and tragic conflicts and I admit that I like his mindset.

Honestly speaking, the eight songs on the positions three to ten do not consistently keep the level of the very promising double strike ("Crusade" and "Templar") at the beginning. Every once in a while, the songs are nearly too opulent, and the predictable integration of female vocals fails to add value to the material. Nonetheless, Rubicon marks an intelligently designed work which mirrors the ambitions of its spiritual fathers in a very suitable manner. Honestly speaking, I thought that seven musicians is too much of a good thing. But the Belgian horde shows that it has understood the meaning of teamwork and its tight interplay finds its equivalent in the warm and voluminous production. Maybe it is slightly too polished, but this remains an academic discussion in view of fantastic songs like the title track. This monument reveals many facets and its different sections mesh seamlessly with each other. Although the part with German lyrics and the remaining sequences seem to be taken from two different tunes, they form a homogeneous (and truly impressive) unit in the end. If I would have been the eighth musician of the band, I would also have opted for this song to give the album its name. (But I wasn't involved - for good reasons!)

Apart from my personal situation, I can recommend this history lesson to every metalhead that likes sophisticated art with dramatic, melancholic and powerful elements. It's no pristine black metal anymore and sometimes I miss the "Death Messiah", but only jesters expected a return to Diabolic Serenades. And with that said, enjoy this aromatic cocktail of power, traditional, marginally folkloric and symphonic black metal. Probably even Julius Caesar would have loved it.