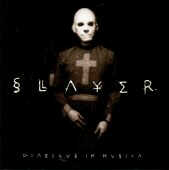 Aside from the title track, 'You Against You' is my personal favourite tune on the recently released Repentless. Its lyrics include the message "it makes no sense that you tie your own noose". Allow me to add in all modesty that it also makes no sense to publish an insincere album which has not much in common with the style that the vast majority of the fans prefers. However, to adapt a German proverb, I guess Araya and his companions were still (relatively) young and they needed the money. The result was one of their worst products up to now.

The most popular songs of early and / or successful albums define the identity of a band. This does not mean that any form of development is a cardinal sin. Darkthrone have cleverly managed to re-invent themselves again and again. Their outsider image is the common element that unites their works. Yet it is a fact that some bands don't find the right balance between constancy and evolution. Slayer belong to these bands. They did no longer believe in the dogma of high velocity. This was not really new, inter alia their non-punk track on Undisputed Attitude had already pointed in a new direction. However, on their eighth album, Slayer made excessive use of mid-tempo parts and the result were ponderous cripples such as 'In The Name Of God'. To add insult to injury, this was one of the tunes that additionally suffered from inappropriate breaks. Heavyweight rhythms can replace high velocity successfully, but they cannot develop their effect if somebody constantly applies the emergency brakes. One could say that Slayer had lost their magic "piece by piece" after the release of Reign In Blood, but the now preferred, more or less trendy style almost appeared as an unexpected act of betrayal. The choppy riffing of 'Stain Of Mind' awoke memories of legions of mediocre bands, but it was not linked with the approach that established the gargantuan reputation of Slayer. The same applied for the robotized vocals that showed up occasionally.

Of course, the musicians had too much energy and creativity to release a great pile of shit. A certain number of good riffs and some fairly intensive parts proved evidence that the formation was actually still able to compose a more than solid album. For example, the few dramatic parts of 'Overt Enemy' did not lack of intensity, 'Perversions Of Pain' scored with a weird melody line and the first song unleashed a proper storm after the half-baked intro. Unfortunately, I have to add that 'Bitter Peace' had some parts that seemed to be borrowed from 'War Ensemble'. Nevertheless, this was a promising opener - and it was simultaneously deceptive, because the overall result was disappointing.

Without the vocals of Tom Araya, who had put his heart and soul in his performance, I would not have identified this work as a Slayer album. These groovy parts, this embarrassing attitude and the absence of murderous brutality formed a product that did not meet my expectations. It seemed to be no coincidence that Slayer's logo on the cover surprised with a new design; this group wanted to represent something new, due to whatever reason. The fat production did not help to make things much better. The sound was powerful and heavy, but a good production can only underline the vitality of strong songs. Vice versa, it is never able to make weak songs good. Therefore, I would rather have preferred to be confronted with some insidious and aggressive Show No Mercy leftovers in demo sound quality. Yet the protagonists revealed their truly merciless face and tortured the audience with meaningless, one-dimensional and tedious titles such as 'Love To Hate'. And allow me to come back to the widespread absence of high velocity; who the hell had told them that mid-tempo is sexy? Many good efforts were killed by the unpleasant dominance of pretty slow-moving rhythms. I know, I have mentioned this point already, but the co-inventors of high speed must accept this repeated criticism.

Diabolus In Musica left an extremely ambivalent impression, barely enough to keep body and soul together. Without fillers like the stupid and seemingly endless 'Wicked', it could have been a little bit better. Yet it is pointless to think about a less weak configuration of the album. The best salad is a nice piece of meat, but this finding is not helpful as long as only vegetarian meals are offered.

The mighty kings of thrash degenerating to nu-metal? Yes and no, this album is Slayer any way you look at it, and it stands right alongside Reign in Blood and Seasons in the Abyss as one of my favorite Slayer albums. Still, to most people and fans this was a total disappointment.

There is a general lack of solos and melody, but these are replaced by brutal riffs and furious shredding, most at very fast tempos kept up by the impressive new drummer Paul Bostaph, making it seem like Dave Lombardo’s skill won’t be missed by Slayer all. He absolutely drowns all the songs in technical show-off and clever drum fills.

Tom Araya’s vocals are angrier than ever, but his deafening screams get really annoying on the last few songs. I become sick of hearing him scream at the top of his lungs so much, mostly about war, propaganda, murder and destruction. Sometimes he changes it to a hoarse whisper, but it still doesn’t help.

The Diabolus single is officially Stain of Mind, which is the simplest song with the strongest beat, obviously meant to be marketed to the nu-metal kids rather than the old fans. I find this song to be the worst and most annoying on the whole album. My favorite tracks are Desire and the last two, Screaming From the Sky and Point. These are the most violent and have the best lyrics.

A notable part on the album, definitely, is the first lead break in Perversions of Pain, by Kerry King, a chaotic solo over totally insane drumming.

Slayer seem to want to get to the nu-metal crowd with this album, but it’s just way too extreme, violent and Anti-christian for it. I’m glad. There are a few lousy riffs here and there but overall Diabolus in Musica is one of the best, most professional Slayer album to date. Perhaps second only to the untouchable Reign in Blood.

Bottom Line: Get it only after Reign in Blood! One of the most violent Slayer albums to date, effectively combines thrash and nu-metal