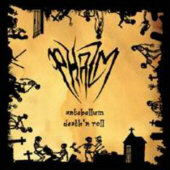 It is very strange that some bands get a lot of recognition simply by copying other bands and following trends, but genuine originalities stay almost unknown or go unnoticed. Phazm is a perfect example of such abnormality. Their music is very unusual, interesting and uncanny, but you don’t see their name on top of the lists or popularity rankings. Sad but true.

Most bands branded with Osmose Productions logo are pure or kvlt Black Metal, but Phazm isn’t one of them. Their combination of Death, Doom, Black Metal and traditional Rock’n’Roll is unique and unusually effective. Featuring members of Scarve, Yyrkoon and Agressor, what we find here are: compositional diversity, imagination turned all the way up, awesome musical ideas and top-notch production. While listening to their “Antebellum Death ’N’ Roll”, it is obvious that those boys are having tons of fun combining all the genres and adding unexpected twists to their mix. (Having a frenzied harmonica solo instead of guitar in the middle of a typical Death/Black Metal blast would be a good example.) But music is not the only thing worth mentioning in this package. Excellent CD (for those of you that still buy CD’s) booklet comes with an obscenely hilarious cover and artwork taken straight from a macabre comic book bound in hell. All songs have their own illustrations, portraying each of the songs’ meanings. A very creative and original idea that shows you that the band not only cares about the quality of their music, but also about the visual outcome of the end product. And last but not least, second side of the disc features a bonus DVD with a very well recorded and lighted concert at L’envers - Nancy - Cakehouse of the Loving Dead. A feast for the eyes and ears I must say.

“Antebellum Death ’N’ Roll” is a very solid record with lots of good quality music and extras that somebody put a lot of thought into. No matter what extreme music you listen to, you’ll find something for yourself here. One of the diamonds in my collection – that is a fact.