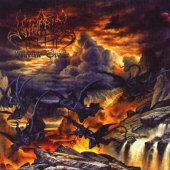 One thing was for sure since 1999, the successor of Hell Eternal would have to flex its muscles or it would stand in the shadow of the aforementioned output eternally. Well, the artwork of Endtime Divine is rather inspired by "Hell Awaits" than by Hell Eternal, but the music itself lies in close proximity to that of its predecessor. Setherial still offer their unrelenting attacks with absolute belief and total authenticity and the result are murderous, venomous and totally black pieces of metal. Density meets brutality, but at the same time melodic elements coalesce with sadistic fury. In other words, Setherial embody many components of this typical Swedish style that is characterized by its perfect mix of 90% violence and 10% melodies. "Subterranean", one of the highlights, is, among other things, based on such an actually brutal riff which simultaneously creates, almost by chance, a devastating melody. Furthermore, it lends the chorus a certain catchiness. This number would do credit to bands like Dark Funeral or Naglfar as well, in terms of style and in terms of quality.

Setherial are not innovative, but they also do not swim with the trend. Their conviction shimmers through every composition of this uncompromising album. All more or less melodic parts cannot cloud the fact that this is still a radical kind of music due to its breakneck guitar lines, the powerful drumming and the throaty, totally non-melodic voice. The lead singer conveys the customary quantum of hatred and misanthropy. He does not sit in the driver's seat, he rather appears as a companion of the guitarists. However, this is no problem at all, because the dudes at the six strings know how to navigate through the barren landscapes of Setherial's black realm. They ensure the necessary number of breaks and different lines with the effect that the album never gets boring for genre freaks. Instead, maturely designed songs like "The Underworld" illustrate the entire glory of (Swedish) black metal.

I cannot deny that Setherial fail to deliver unique features. However, the compositions are not predictable, and no other band has the copyright on this kind of metal. The crucial thing is that the song-writing can be described as coherent, mighty and rigorous. Fortunately, the songs also profit from the profound production which underlines the dark atmosphere of the material. In view of this mood, it comes as no surprise that the aptly titled "The Night of All Nights" belongs to the best tracks, while a few numbers of decent pieces rather pass by without leaving a long-lasting impression. Given this fact, Endtime Divine is a little bit weaker than the formidable Hell Eternal, but it is still a strong work that avoids any external, non-black inspirations. Therefore, I can recommend the album to each and every black metal soldier who thinks that the periods between two Dark Funeral albums are too long.