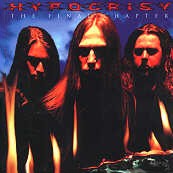 This was one of the first death albums I bought and really enjoyed right away. Death bands, for me always took quite a while to sink in and really appreciate, so this one will always hold a special place in my heart. Recorded back in ’97, I considered it be one of the best extreme metal releases that year.

Engineered, produced and mixed by Peter and Lars in the infamous Abyss Studio in Sweden (other bands in the Abyss Studio have been Dimmu Borgir, Old Man’s Child, Children of Bodom and Susperia, to name just a few), this album was meant to be Hypocrisy’s final chapter (sorry...couldn’t resist), apparently not, if you see today they have another 2 or 3 releases out there in the metal world. What was to be Hypocrisy’s last album, the band have poured all their heart and soul into this record, and made it stand apart quite considerably from other death metal albums.

"The Final Chapter", follows an interesting pattern in the composition of the songs. It seems to go: brutal/heavy, slow (and some parts clean), brutal/heavy, slow (and some parts clean) for each alternating songs. I don’t know if this was intentional by Hypocrisy, but it really helps to break the album up somewhat. Peter’s clean vocals also assist in adding another unique element to this release. Guitar riffs are of a standard synthesis in their playing, but as you’d expect from Hypocrisy are of awesome high quality. Hypocrisy tend to walk down a different path when it comes to the lyrical expression in their tracks, themes of aliens, Roswell, and abduction are the norm throughout this and other Hypocrisy releases. Good tracks on the album tend to be of the slower variety: "Request Denied", is a lovely death song, and really showcases the bands ability to not play pure heavy death. Peter’s clean vocals are of absolute heartfelt emotion. At the other end of the spectrum "Evil Invaders" is brutally fast, and the best pure death song on the album. "The Final Chapter", rounds out this release and it's the longest song on the album, the lyrics are on the inside cover, and tell of someone being abducted, and having been tortured for his whole life, then trying to escape.

Bottom Line: Hypocrisy’s best release and "The Final Chapter" seems to hit a sensitive spot in me, and for that I really enjoy this finally composed album.