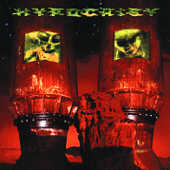 This is the sixth opus from the genius Peter Tagtgren’s brainchild and it doesn’t disappoint... too much. Anyway. With so many new bands in the underground and so many innovative styles and mixed genres, it’s becoming impossible to label any band as ‘this or that’-metal, and Hypocrisy are just one of those bands.

I could find many fitting words for this album, good and bad, but the one that explains the most is -boring-. Now don’t get me wrong, it’s not boring in the usual way, where you’re just forcing yourself to keep listening, here you have to force yourself to actually get -into- the songs, and that’s the hard part.

The production is very bad, horribly overdistorted, so it’s really difficult to pick up the actual riffs and it gets frustrating hearing more buzz than note. I don’t know the reason for the poor production, Peter Tagtgren is the guy who produces albums on a regular basis, owns the Abyss studio, and has attached himself to some big names like Children Of Bodom and Dimmu Borgir. So just why in the world he produced his -own- album so poorly I don’t understand.

Songs that highlight the self-titled album are mostly the fast ones, "Fractured Millennium", "Apocalyptic Hybrid", "Time Warp" and the bonus track (which is actually my favorite one of all) "Self-inflicted Overload". The Hypocrisy trio executes these in the finest deathrash fashion. However, the greater number of songs here are slow and lifeless. "Reversed Reflections" being the finest one of this kind, delivering sweet melodies and a gut wrenching solo.

Slow paced and laden with background melodies, the slow songs usually have a promising start but quickly lose the listener as they keep repeating and fail to progress much further than the typical song structure. The extensive distortion of the songs is a big weakness too, and makes many songs sound really similar and almost impossible to tell apart. Many of these seem like pure filler material, especially #9 "Disconnected Magnetic Corridors", total crap. I haven’t been able to sit through this song twice.. Others, however are really good and get interesting.

As you’ve probably noticed, the song titles are quite unusual too. Everything about aliens, the cosmos, abductions, sci-fi, and the like, the X-Files theme album. This makes the songs even harder to tell apart, Songs like "Fusion Programmed Minds", "Elastic Inverted Visions" I don’t remember by name, but by track number, like "#4 has an awesome solo" and "#8 is the cool, fast one."

I also must mention the absolutely horrible digipack packaging. No lyrics, no nothing, just a big, stupid-looking picture of the band.

Bottom Line: Really distorted and monotonous-sounding stuff, briefly interrupted by fast thrash metal. Takes a bit of getting into and you can eventually pick out the good from the bad.