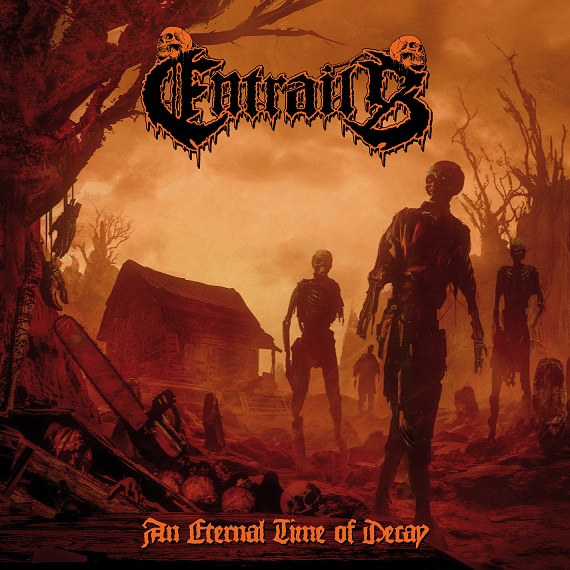 On their already seventh album within 12 years Swedish death metal institution Entrails invites us for another sick trip to meet death and decay. Tuned down crushing HM-2 guitar sound prevails on An Eternal Time Of Decay just like on the previous releases and sends the listener back into the early 90s. The production is done very well (all producing was done by the band itself, mixing by Jimmy Lundquist, their guitar player himself and the mastering was done by Dan Swanö) and sounds the way a death metal album should sound like.

After a short gloomy intro that raises some ghoulish zombies from the graves in my imagination, the death metal inferno slowly starts. Okay, the cover was an inspiration for this image; too, I have to confess. 'Die To Death' is a quite fast and crushing track with some really cool lyrics (Taylor Nordberg from Inhuman Condition, Deicide etc. wrote these for the band) and appears to be a very good start for the album. The next few tracks however rush along without any big surprises. The guys deliver their “usual” Swedish death metal songs with some punk influences so that's the reason why I said that the album starts slowly. It's not bad, don't get me wrong but something is missing a little bit. Again we meet Taylor Nordberg featuring a guest appearance with a guitar solo on 'Slayed To A Pile Of Flesh' - the lyrics were written by the former Entrails member Jocke Svensson. 'Open Casket Feast' is turning into a pretty good and very classical Swedish death piece and with 'Dead By Evil' (guess what the inspiration for these lyrics was) the album turns out to be pretty awesome. A sinister intro and a ton of HM-2 riffs witch catchy, stomping melodies start to kick ass and rip you out of the somewhat half-awake mood. By the way the track was already written in the very early 90s. Also the other four following tracks are some real killer tracks. I guess if they had been released in the heydays of Swedeath Entrails would have become one of the big ones along the other ones needless to mention here. 'Autopsy' is a very melodic song with some double bass arrangements and a very gloomy whispered chorus; it is definitely one of the highlights of the album. Again the band had some lyrical support, this time by Danny Nelson from Malignancy and his girlfriend Eva Andersen. Closing with a mid-tempo wrecking-ball called 'Possessed' the quartet shows time and again that they can write pretty good death metal songs.

So, I guess I have to draw a conclusion now, right? An Eternal Time Of Decay has its strengths but also its lengths (anybody nominating me for the next Pulitzer Prize for this sentence?). The first couple of songs (apart from 'Die To Death') are quite average death metal one or the other may have heard somewhere else already. But I guess that the intention of Entrails isn't to reinvent the wheel here so it is quite noteworthy that they put their strongest songs to the second half of the album. Maybe it's just some kind of psychological trick to listen to the whole album. Nevertheless it is an album that isn't too bad to listen to and for sure no waste of time. Death metal purists will have a lot of joy while listening to it while people who may be looking for something new better take their fingers off of it.