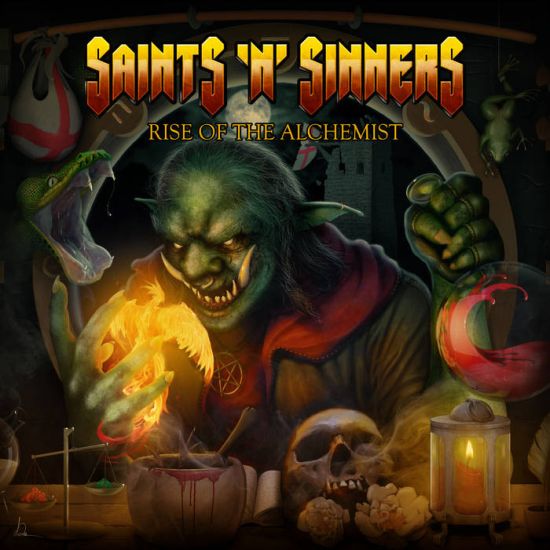 Buy on: Bandcamp
Type: Full-Length
Release Date: April 8th, 2022
Label: Independent
Genre: Power
1 As Above So Below
2 Sign Of Things To Come
3 Sacred Ground
4 Saviour Of The Damned
5 Dreamer
6 Death Comes In Winter
7 Queen Of The Nile
8 Ivory Tower
9 Rise Of The Alchemist
10 Catch 22

I admit, I may or may not have made a beeline for this band when a friend of mine told me they had a striking Edguy and Avantasia resemblance, since Edguy had played a vital part in forming my taste. But I certainly wasn't expecting something this... similar. I guess there's truly nothing new under the sun in the case of power metal.

While their debut sounded more like a mix of the best of Edguy (or worst of, depending on whether or not you like "Hellfire Club" and "Rocket Ride"), this album actually progressed with more of an Avantasia energy and is certainly far more power metal. The very first song 'As Above So Below' had that feeling of a shortened version of 'Let The Storm Descend Upon Me' with the haunting orchestra, banging rhythm and finally, the highly infectious and more upbeat chorus. Also, you get the slightly chaotic group vocals at the end as well. And by the third track 'Sacred Ground' you know for the majority of the album, you'll get fairly enjoyable power metal of the heavier, German type. With that punchy riff, that gritty bassline, power metal can hardly be more generic yet more satisfying. Unfortunately, the title track proved again that longer is not necessarily better and more epic, what with the track being the well nigh 12 minute yet still bored me with its simplicity. There are interesting points of course, like the moment around 7-min which just sounded like a bland Mandrake ripoff. But unlike Edguy's masterpiece, the whole work lacked a bit of fluency and links between parts. Still, the album ended on a fine note - 'Catch 22' being a rather AOR-ish rocker like those of Edguy's "Rocket Ride" era.

Now, concerning musicianship, everything is just so slick on here. The vocal Mehmet Kaya offered up pretty powerful works, not strangely unlike Urban breed with a rougher edge. So yeah, the ballad 'Dreamer' wasn't actually that boring. Deniz Tuncer's riffs and solos are definitely among the simpler yet more heavier line, which works just fine for me. I'm also fairly impressed by the overall straightforward and obvious bassline. Yet the speed is obviously not Saints 'N' Sinners strongest point, and the Doğan Rekkalı does lack a bit of energy to his drumming.

So yeah, this is probably what I would tag as power metal at its most generic. But for me, there's the Edguy resemblance to consider (I won't call it bland plagiarism). All in all, this is a very enjoyable album to listen to, but I won't recommend any constant spinning.