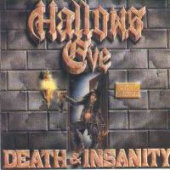 The debut of Hallows Eve offered two of the best (thrash) metal tracks of all times. Of course, I am speaking of "Plunging to Megadeath" and "Hallows Eve (Including Routine)". The furious opener with its raging guitars and the monumental title track pulverized all that stood in their way. The problem was that the further songs remained far behind these two jewels of US-American thrash. Death & Insanity, the successor of the debut, revealed a more homogeneous picture and proved the song-writing skills of the band as well as its musicianship in an impressive manner.

In general, the title track and its reprise framed nine high quality thrashers. The complexity of "Hallows Eve (Including Routine)" did not reappear, but the band also did not expose itself to the reproach of primitiveness. Roughly speaking, the songs of Death & Insanity and those of the debut met on equal terms. Only one question remained unanswered. Why did they record these more or less superfluous instrumentals? This mystery cannot be solved. Apart from that, "Nefarious" marked the only song whose guitar work did not fully convince. Well, I do not think that this constituted a serious matter. Let us turn our attention to the highlights of the album.

Hallows Eve dished up a varied menu of thrash with a significant portion of punk and heavy metal. For example, the punk-influenced "Suicide" was nothing else but a rush of adrenaline, swift as an arrow and equipped with restless vocals. Its storm lasted only 75 seconds. But this was enough time to integrate four verses, four choruses and a miniature solo. In simple terms, the song was fantastic. This track was contrasted by eerily creeping tunes like "D.I.E. (Death in Effect)" or "Lethal Tendencies". These epics did not take care of the usual speed dogma of thrash metal. Hallows Eve thought it would be better to let the riffs do the talking. Due to their phenomenal power, this was the right decision. The viscous songs still spread an aura of horror. Especially the staccato of the rebelling chorus of the ironclad "D.I.E." left its scent. By contrast, "Lethal Tendencies" distinguished itself above all by its smooth yet very heavy flow and its intensive atmosphere. These tunes as well as the remaining tracks profited from the powerful, metallic and gapless sound.

The straight title track came as a real bombshell, but it unfortunately fell short of its potential. It clocked in at 2:21 and this was definitely too short for the ruthless riffs that it included. Worse still, its reprise was even shorter. But be that as it may, I suggest taking a close look at two further highlights. "Goblet of Gore" disgraced all those idiots who were of the opinion that thrash metal followed a one-dimensional pattern and lacked depth. It combined straight eruptions with more playful parts and a chopping staccato sequence was also integrated. Not to mention the calamitous "we the people shall destroy" choir that suddenly emerged. The powerful vocals of Stacy Anderson crowned this song. Contrariwise, "Nobody Lives Forever" possessed a tremendous flow while demonstrating the inevitability of death. Its riffs were less offensive than those of the other tracks, but they had a subliminal strength that took the song to the highest level.

Albeit the name of the album indicated a very dark lyrical content, the band surprised with some fairly optimistic lines. If we cannot defeat death, we are still able to spit the Grim Reaper in his face - this seemed to be the name of game. This is at least my interpretation of lines such as "Only one way to win, only one way to live / If you give in then you're going to pay / I'll be the conqueror, I'll thrash till death". Nevertheless, it goes without saying that the full-length mainly confronted you with a sinister and fatalistic aura. Do not overestimate the grin of the strange guy on the front cover. I am sure that he did not listen to this ominous masterpiece of thrash metal called Death & Insanity. The album does not deliver any reasons to laugh. The guardian of the morgue is just proud of the rat that he has caught.