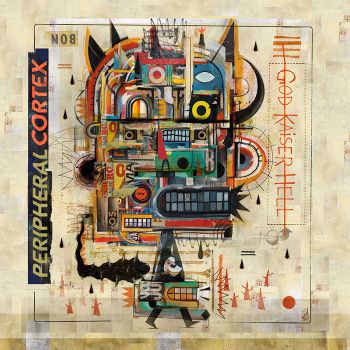 For as much as I love technical death metal, it's no secret that, in any genre of music, bands start to sound the same after a while. There's nothing wrong with bands sounding similar, but, when someone breaks the mold and you get a band that's truly unique, it's a special experience. Peripheral Cortex, from Germany, is a relatively new act that fuses mathcore and technical death metal to create one of the most bizarre sounds in the genre's history.

God Kaiser Hell is a sweet blend of viciousness, technicality and experimentation. Firstly, the vocals are all over the place. The low growls aren't too brutal, but they get the job done - the high pitched screeches are insane. This guy sounds like a madman when he screams out hysterically, sometimes at random over the various tracks. There's clean metalcore singing, which would turn me off 9 times out of 10, but has actually grown on me in the context of this record. There's spoken parts, falsettos, you name it, it's in here somewhere.

Instrumentation is this album's high point, however. It has an almost video game-like feel, similar to The Beast of Nod, but this is an entirely different monster. I guess the best mish mash of bands I could come up with to describe this would be Archspire, The Dillinger Escape Plan, Unhuman, and First Fragment. Yes, this is that all over the place. The riffing isn't necessarily mind blowing, but the lead guitars and fretless (?) bass makes up for the mediocre riffing plenty. There's whirling dissonance, explosive melodic sweeps, breakdowns and, of course, sick pinch harmonics.

As one could imagine, the individual performances are incredible. Every band member is a master of their instrument, and their songwriting plays to their strengths for the most part. Rarely do you get a breather from the relentless onslaught of wankery and extraterrestrial vocals. This creates what could easily be perceived as just a wall of notes, but with repeated listens, a pretty good tech death record is revealed with plenty of fun and intriguing ideas.

Ultimately, it is a hard album to digest and I'm not even sure I've let it sink in enough just yet. But, about 15 listens in, I can firmly say this is one of the most unique technical death metal albums I've heard in a long time. This is definitely not for everyone, but those who don't mind wankery and are looking for something "quirky" and different might find some enjoyment in checking out this beast. Not for the faint of heart.