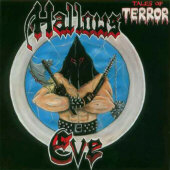 Let's get back to the (so-called) good old times. Everything was new and fresh as thrash metal started its worldwide victory march. Hallows Eve's debut was a child of its time. Amazing speed, an overdose of energy and a surprising musical maturity formed it. Just like so many further formations that have a legendary status today, Possessed, Forbidden or Nasty Savage to name but a few, the guys from Atlanta did not stumble into the recording studio next door. They had some phenomenal songs under their belt and were able to realize their musical visions effectively. I admit that Hallows Eve did not have the same position as some of their competitors, because they entered the studio a little bit too early. The playtime of less than 29 minutes gave a first indication and the quality differences between the individual tracks were enormous. Anyway, this debut still kicks ass.

Two absolutely outstanding songs at the beginning and the end of the running order frame the further material. Similar to "Agents of Steel", "Exodus" or "Hell Awaits", "Plunging to Megadeath" (no, Dave Mustaine, this is no typo) is one of the songs that must be part of every "best of classic thrash" compilation. Its rapid part goes straight ahead, takes no prisoners due to the mercilessly trampling main riff and crowns itself with a catchy chorus. The unleashed solo adds another furious touch and the following mid-paced sequence does not only convince with its lacerating riffing. It also gives room for Stacy Anderson to break out of his barking scheme. He sends some fervent and alarming screams through the speakers and completes the fanatic overall picture of the opener. The closer shows a completely different structure. One might call it progressive thrash in view of its complexity and the great number of autonomous sections. Yet their autonomy does not mean that the song fails to deliver a coherent overall picture. Thus, this is not a tune only mathematics professors can enjoy. Despite their dissimilarity, all parts blend seamlessly with each other. The constantly great riffing and the dramatic ending are the final components that make "Hallow's Eve (Including Routine)" to a real diamond.

At the other end of the scale, one finds the slightly ill-defined "The Mansion". It suffers from both its soft and unsuitable beginning and an unclear song pattern. The punk-like "There Are No Rules", the forerunner of the very exciting "Suicide", also fails to motivate me to leap for joy. It does not offer much, only the chorus line is shouted a thousand times. Compare these tunes with those I have mentioned in the previous paragraph and you will realize the difference in a matter of seconds. Fortunately, the good songs prevail. For example, the vibrancy of "Metal Merchants" captivates the listener. I don't know why the track was separated from its triumphant intro which here is called "Valley of the Dolls", but this question can be left open.

The direct and well-defined mix can compete with the productions of comparable albums of that time. Anderson's vigorous and variable voice has the prominent place that it deserves, but the guitars are also equipped with a powerful and pleasant metal sound. From this follows that Tales of Terror still emanates a powerful aroma although it celebrates its 35rd anniversary next year. Shit, the good old times are really long gone.